A Twitter Chat with Association of Chief Police Officers (ACPO)

We have had serious concerns with the way police continue to respond to victims of domestic and sexual violence, as well as the ways they respond to criticisms.

These are the first two questions we raised during the twitter chat:

We then joined in a conversation on assessment tools for the risk of domestic violence:

There were a number of people and organisations involved in the twitter chat and Louisa Rolfe made several statements about "listening" to victims. We asked the following because "listening to victims" is an easy statement to make if you don't follow through by putting in place policies and guidelines developed from conversations with victims.

These are all important questions yet the following responses from ACC Louisa Rolfe to our question on serious case reviews demonstrates a failure on the part of ACPO to engage appropriately: 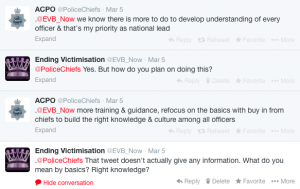 This is the conversation we had on the gendered reality of domestic violence: 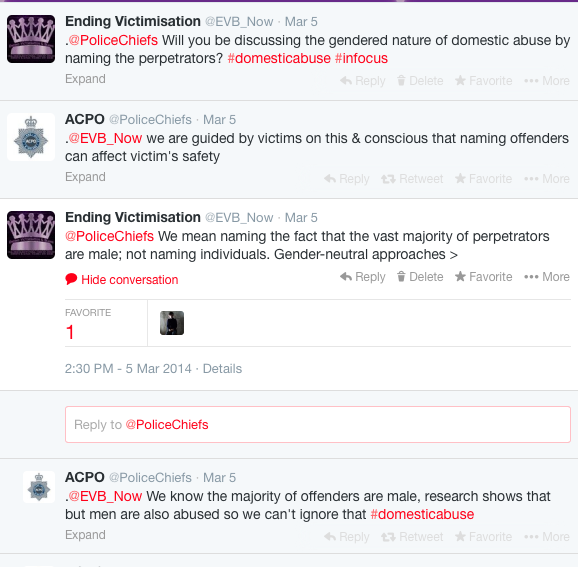 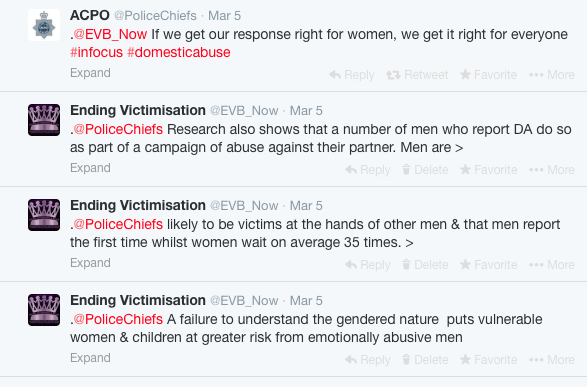 ACPO had an opportunity to engage in a meaningful discussion on domestic abuse, yet their answers contained very little information. If the police want victims to trust them, they have to do better than this and, frankly, scheduling this chat on the day that many women's service providers were attending the annual Women's Aid conference is telling. We need transparency. We need to know exactly what steps the police will be taking to gain the trust of victims. We need their policies published online where victims can access them. We need to know precisely what training police officers have to undergo in order to respond effectively to domestic violence. We need to know who is offering this training and how often officers, who can be the first response, are required to update their training.

The police have a problem with institutionalised victim blaming. The APCO chat this week did very little to suggest that the police were actively trying to fix this problem within their organisation.

‹ Take action to reduce suicide that is attributed to the trauma of domestic and sexual violence. The Police, Social Media & Domestic Abuse: #infocus ›