The term “child sex party” is inaccurate and offensive 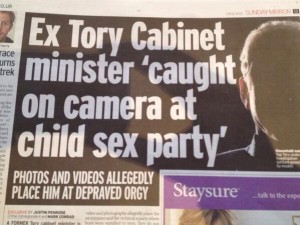 This article appeared in the Sunday Mirror at the beginning of December. I only came across it when EVB retweeted it today. The headline is both misleading and offensive. It is precisely the kind of tabloid hysteria which makes it difficult for victims of sexual violence to get support or to report to the police.

Using such salacious and misleading terms serves only to elide responsibility of the crimes of child sexual abuse and rape from the perpetrators. The investigation into the organised sexual abuse and rape of children by men with political power in the UK has clearly been long in coming. We do a great disservice to the victims of abuse when we throw around terms like "child sex party" rather than naming both the perpetrators and the crimes.

The Sunday Mirror should have never published this headline. It is completely inappropriate.

‹ Review of the Year: Thank you. Jim Davidson brags about not committing rape. ›