This post is also published on Jersey Ric's blog 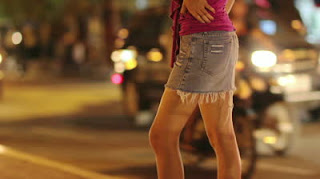 'Child' (Wiki) - "The legal definition of child generally refers to a minor, otherwise known as a person younger than the age of majority"

"Prostitute" (Wiki) - "Prostitution is the business or practice of providing sexual services to another person in return for payment. The person who receives payment for sexual services is called a prostitute or sex worker"
Continuing my "AVP" theme, another inaccurate and offensive term that is in regular use is "child prostitute", as detailed in the above recent report.

a) Children can voluntarily plaster themselves with make up, dress themselves up with skimpy clothes and tout themselves around red light districts looking to provide sexual services for money?

If you answered a), get off this blog - there are others more 'appropriate' for you elsewhere!

If you answered b), ask yourselves then, after reading the definitions above, why not only the media, but UK legislation itself, calls victims of paedophile gangs "child prostitutes" and not "prostituted children"?

Just two words, swapped around, but a whole heap of difference in their meaning.

Why is it so hard for the media to see this?

Why the hell is legislation itself in the UK still referring to "child prostitutes"?

Reading through the Sexual Offenses Act 2003 , anyone under the age of 18 is considered a "child prostitute" (as opposed to the legal age of consent, 16)!

Would it not be infinitely more accurate, to rename victims of this crime who are under sixteen as a "prostituted child", and other victims who are either sixteen or seventeen (over the legal age of consent) as "underage prostitutes"?

Of course it would - so why again does the media, legislation, and society generally as a whole still call children who are exploited, abused and raped in this way "child prostitutes"?

As a society, we really need to start watching our language

‹ Social Workers Fears I never told anyone because I was drunk ›

3 thoughts on “The Term ‘Child Prostitute’”