The Metro conflates child rape with an affair

We will be writing a formal complaint to the Metro about this article which conflates child rape with having an "affair". Dominique Cottrez was raped multiple times by her father, starting at the age of 8. She became pregnant by rape on 8 separate occasions and suffocated the infants. This was not an "affair" nor was there any 'romancing". This was a sexual predator who prepared his daughter for sexual abuse and rape as a young child and who continued to rape her as an adult.

The Metro coverage does not mention rape, incest, preparing a child for sexual abuse (grooming) or why a woman being raped over the course of her lifetime would be unwilling to see a medical doctor for either contraception or an abortion. The National Post coverage manages to cover all of these issues without blaming a victim of child rape and ignoring the perpetrator (who died in 2007) 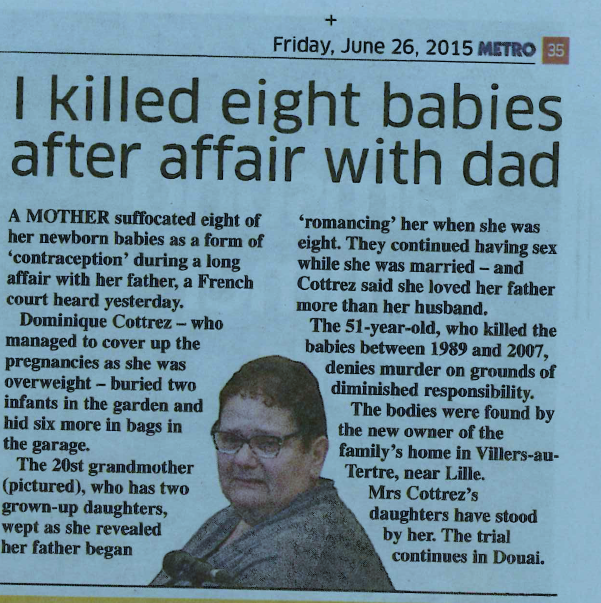 We are writing to raise our concerns about an article called "I killed 8 babies after affair with Dad" published on Friday, June 26th.

This article was irresponsible and failed to conform to any guidelines on how to report violence against women and girls, such as those written by the National Union of Journalists.

Your article conflates child rape and child sexual abuse with an 'affair' between two consenting adults. Dominique Cottrez did not "have sex" with her father. She was groomed and raped from the age of 8. Children cannot consent to sex.

It is quite clear from other media coverage that Cottrez stated she used infanticide as a "means of contraception" as she was afraid of seeking medical support. It was not because she was antiabortion or using infanticide instead of condoms. This is a deeply traumatized woman who is a long-term victim of rape.

We would like to see a formal correction for the misrepresentation of the trial of Dominique Cottrez and we urge you to insist that all staff undergo appropriate training on victim awareness and the official guidelines from the NUJ on writing about violence against women and girls.

You can submit formal complaints here:

If you wish to report any concerns over accuracy, please email correct@ukmetro.co.uk.

The current editor of the Metro is Ted Young (@tedbyoung)

‹ Stranger rape may be rare but they are not ‘one-off’ incidents Please help! ›

One thought on “The Metro conflates child rape with an affair”