The transcript of Jimmy Savile’s final police interview reveals the language used by a prolific paedophile operating under the nose of a viewing public. Described by the Daily Mail as ‘bluster’ it is not the denials, the blatant lies or obscured threats, but the confusing smokescreen, a deliberate un-stating of allegations which misdirects all listening.

The context of the interview should be considered before we examine the type of language and linguistic features he uses. Savile was neither under arrest nor detained at a police station. The interview took place at Stoke Mandeville hospital in Buckinghamshire, a spinal injuries specialist unit, and was conducted by two junior officers. Within the interview, Savile states “I own this hospital, NHS runs it, I own it and that’s not bad.” He makes his power known and threats are also inferred toward the conclusion of the formalities.

It is important also to state that although this is a transcript of a police interview conducted by police officers it is not what may be termed an interrogation, either in situ or character. The officers, or at least one, was with the child protection team and not, as you should rightly expect a serious crime investigating detective. A transcript is an unpunctuated verbatim account of speech. It is a free-flowing text which shows the impulsive construction of language. I am not attempting criticism of the officers asking the questions. Instead I shall focus on attempting to unravel Savile’s own use of language to divert from stating what he did do, and his un-stating of what he didn’t.

During the formal introduction of the interview, Savile interrupts the officer questioning to blurt out that he regularly is the brunt of such accusations and mentions “in my business” and “blackmail” almost instantly after confirming his name and age. This pre-emptive denial continues throughout the setting up. The tone of language used is exemplified by his response to the necessary detail of what happens to the tapes afterwards. His response to the fact they will be sealed and stored is sardonic “Oh, what a pity” and commands his control over the direction of questions to follow.

In response to questions he uses direct denial. However, when outlining the historical context of the night, he is keen to establish his popularity. He adds to the known fact of his career at the BBC by joining a statement in the negative “when you’re doing Top of the Pops and Radio One, what you don’t do, is assault women, they assault you,” He disqualifies the allegations and accuses those complaining and women in general. How such an obvious response to sexual assault accusations continues to be accepted by authorities investigating claims of abuse causes me to despair. He directly condemns the procedure being carried out “so dealing with something like this, is out of the question and totally wrong. Full stop.” The use of the noun phrase “out of the question” highlights the discomfort he is experiencing and attempting to conceal with bravado.

It is his prior ramblings to this exert which exposes more sinister victim-blaming language. Savile lists three counter- allegations suggesting the accusers are attacking him with the allegations and presents himself as a victim of abuse. Firstly, “The reward for helping people is sometimes you get, like a situation like this for instance,” and more disturbingly “cos you see the friendly way that I am, and all of a sudden, somebody turns around and bites your leg,”  inferring these frequent allegations stem from feral behaved untrustworthy individuals. This animalistic reference is repeated later on, but the indirect discrediting of the accusers also attempts to portray Savile as the victim of repeated attempts against his person.

His final self-framing of his victim status in this single response, reminds those listening of his charitable contributions to society as he does so throughout the interview “and the wages for raising forty million pounds, it’s just something just going to knock you on the head.” He directly relates the work for charity with others’ need to make accusations which have been metaphorically depicted as a form of physical abuse. Savile uses many confusing analogies and metaphorical devices intended to distract and or disarm those asking him questions. One metaphor of particular interest to me is “the Broadmoor hat.” 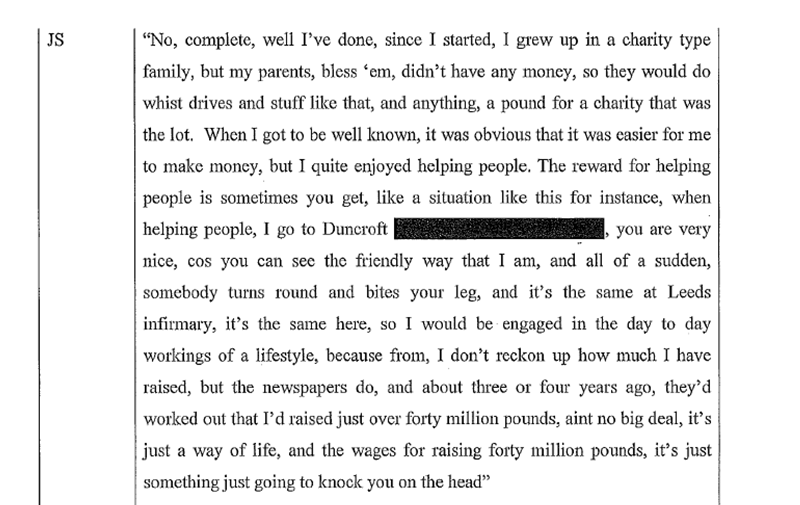 “The Broadmoor hat” is an appendage created by Savile to refer to his ability to be able to think in the way he suggests his accusers do. He affirms an account of a previous accusation and, without prompt or request declares it to be “quite amazing really,” a disingenuous statement that these tales of sexual abuse are so fantastical that he attributes a feigned wonder to them. The metaphorical Broadmoor hat, when worn, enables him to see these accusations without this wonder attached, strongly suggesting that his many accusers all belong in a secure psychiatric unit. This particular use of language utterly discredits not only the allegations made, but the accusers’ very position as victims of a serious crime. Savile uses this stylistic device to add to the pretend panache with which he veils his predatory attacks.

There are references to un-named witnesses numerating between thirty and forty people simply “milling about”. Faceless witnesses to serious crimes committed; he could be referring to the once viewing public. Or maybe, this insignificant mass of people are akin to the “midges” he mentions in his concluding comment. “My business there’s women looking for a few quid,…and normally you can brush them away like midges.” The existence of these falsely-accused false accusers are of such insignificant value to Savile that he not only discredits them using animalistic language, but portrays them as mere parasites incapable of any real impact against his untouchable status, the existence of such being casually dropped in the final, threatening ramble.

By stating what things aren’t, Savile is allowed to discount the allegations without actually offering any credible account of how these allegations may have come about. He does not need to. The smokescreen created provided him the cloak and his institutional connections helped him to wear it. The serious abuse was carried-out in full view of a Nation watching and people saw nothing.

‹ Research Request – Excuses, Excuses The Best Rape Prevention? Change the Behaviour of the Perpetrators, Not the Victims ›

One thought on “The Jimmy Savile Transcript”