The front page of The Sun is "Emmerdale Star Rape Quiz" next to Kerry Katona 5 weeks post baby showing off her "fat" in a bikini and selling their diet regime, a family day out offer and a free pint. Inside the story gets even worse. I have Sun+ access as I'm a member of NMP3 and we sometimes need it so here is the full article -

COPS quizzed the soap star ex-hubby of Denise Welch after a woman saw him on Emmerdale and accused him of rape.

Brookside veteran David Easter, 54, denies the alleged attack 17 years ago. He was interviewed under caution at a police station. Easter left several hours later — and not arrested.

Last night a source close to the actor — who has also appeared in Holby City, The Bill, Family Affairs and Doctors — said: “It’s a scandalous allegation.

“He’s hopeful it won’t go any further. The woman saw him on the telly 17 years on — it’s a case of his word against hers.”

The star’s lawyer Julian Lee said of the alleged crime: “It relates to a woman he knew well and was not a random incident.”

The allegation is one of rape. It is totally denied. The matter has now been referred to the Crown Prosecution Service for a decision whether or not to charge.

“The lady in question was in her thirties at the time. She saw him on Emmerdale and decided to make the complaint.”

The lawyer also stressed following recent showbiz scandals in the wake of Jimmy Savile: “There is no suggestion this was anything more than one incident — and certainly no children were involved.”

Easter was wed to ex-Corrie actress and Loose Women presenter Denise, 55, for three years until their marriage crumbled in 1988.

He was playing hospital porter Pat Hancock in Brookside at the time.

The actor lives with his long-term partner and five-year-old son in Hanwell, West London.

He was interviewed at Sutton police station in the south of the capital on Tuesday — five months after the woman made her complaint.

ITV’s Emmerdale, in which he appeared as businessman Gil Keane, said: “This is not something we will be commenting on.” Scotland Yard also refused to comment.

DENISE Welch’s ex-hubby David Easter has knocked around in telly soaps for decades — culminating in his Emmerdale role last year.

He was in Brookside for three years in the 1980s but is most famous for playing bad boy Peter Callan in Channel 5’s Family Affairs.

West End shows he has appeared in include Joseph and the Amazing Technicolor Dreamcoat alongside Jason Donovan.

Aside from the awful presentation on the front page and the suggestion of a pub quiz style rape joke going on it's this line from the lawyer which most horrified me - following recent showbiz scandals in the wake of Jimmy Savile: “There is no suggestion this was anything more than one incident — and certainly no children were involved.”

So that's alright then. I was only once and with an adult woman so no harm done?! Grrrrrrrr! 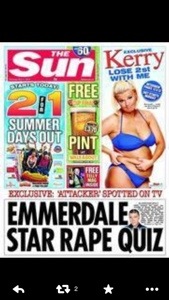 ‹ Rumors of rape sexual assault? while in a relationship ›