.@perthnow suggests child rape is the same as a ‘sexual relationship’ 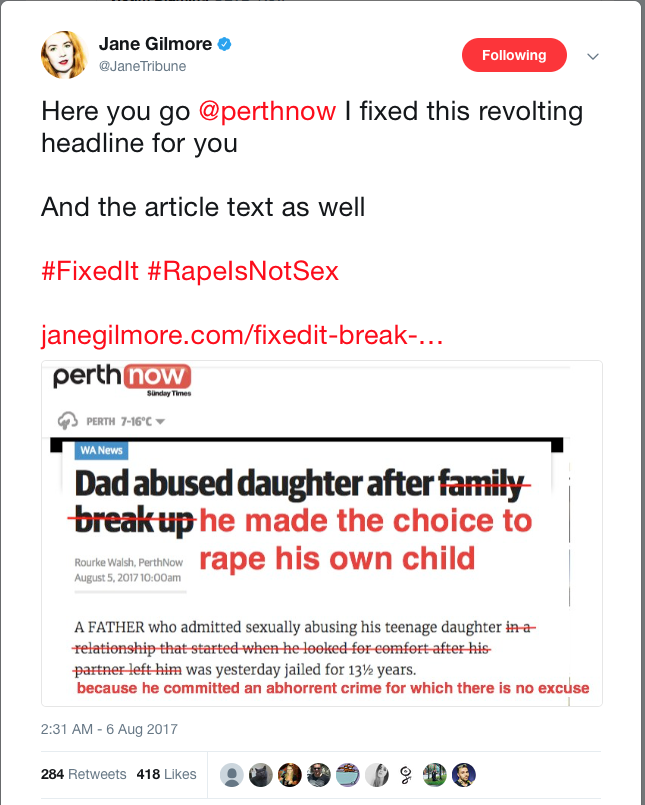 This article on the sentencing of a father for child rape is a catalogue of minimisation and excuses for child rape. It is literally a guide for defence attorneys and child rapists. This article is one of the most egregious examples of media erasure of male violence. We're stunned that they used the term 'sexual relationship' rather than child rape. This is why we campaign for journalists and editors to undertake specialist training in domestic and sexual violence and abuse. Because there is no excuse for such a heinous misrepresentation of a child rape. Jane Gilmore has written an excellent post here breaking down the serious failings of the newspaper:

.... When the media, as it so persistently does, labels sexual abuse of children as “child sex”, we are weakening the public understanding of the extent and effect of such abuse. This has serious effects. A study conducted for the Royal Commission into Institutional Responses to Child Sexual Abuse found that juries who have a better understanding of the facts of child sexual abuse are less likely to make mistakes in their assessment of evidence given in court.

Children cannot have sex with adults. Sex requires consent and children, by definition, cannot give consent, so it’s not sex. It’s rape, it’s child abuse, it’s sexual abuse, it’s any number of terms that accurately describe a crime. An act perpetrated on an innocent victim, someone who was unable to defend themselves from the violence done to them, and who suffers for years, possibly decades, from the trauma caused by an adult’s choice to commit that violence.

That word choice is the key. Sex is a choice made by every person involved. Rape and abuse are a choice made only by the perpetrator. The victim has no choice. ...

Conflating child rape with a 'sexual relationship' erases the choices of the perpetrator and blames both the child and their mother for the actions of the rapist.

‹ My Boyfriend Blames Me… who’s crazy? ›