As Jean Hatchet demonstrated in her brilliant post on everything problematic with Telegraph's Allison Pearson's rape victim-blaming piece, I thought I would add a couple more observations from her subsequent defense on twitter.

"I have a friend who..." - Early on when defending herself on twitter she offered up "I have a friend who is a rape survivor". First of all, I bet said friend is well chuffed with her discussing this as a shield for her uninformed views. This argument is commonly used by racists and sexists who feel that they can't possibly do wrong, because of (insert race/gender/orientation)"friend".

This tweet was directed towards a worker at a domestic violence project who voiced her concern at the piece. Someone more clued up, than say Hayley from the local beauty salon. https://twitter.com/allisonpearson/status/532691527114690560 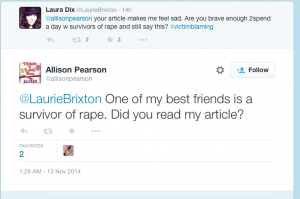 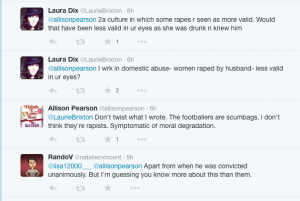 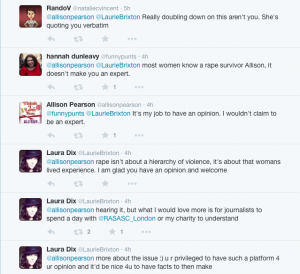 Refusal to listen to survivors - Pearson rides roughshod over the experience of a survivor and ignores her. Talk about privilege, eh?

@there_runsMary @blefuscu74 How can something be "violent" if the person says she didn't even notice it was happening?? 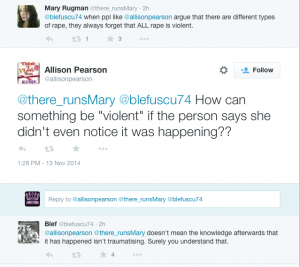 For a journalist who writes for the Telegraph, you would think that responsible writing, even for a column, would entail actual research for a highly difficult subject rather than conduct a straw poll conducted at the local beauty salon. I know for a fact that if I submitted this as a piece of journalism coursework, it would be laughed out of the room and possibly spat on. So why on earth is this irresponsible piece allowed in a prestigious newspaper website?

By the way, I tweeted her the CPS guide on victim blaming, but haven't heard a peep out of it. For a grim game of sorts, how about checking off every sentence in her op-ed against the guide?

I'm not holding my breath on a response from her.

‹ We cannot support Topshop’s new jewellery to raise money for the EDV Global Foundation This is rape culture: Comments submitted to the site ›