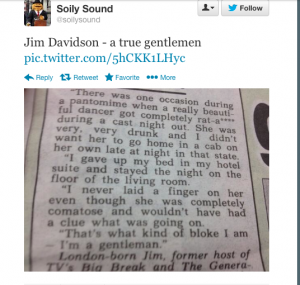 This is the point we have arrived at: a celebrity gets into the newspapers for bragging about not raping a woman even though he totally could have and gotten away with it.

When did our definition of a good man, or a 'gentleman' as Davidson claims, become so low that you get be a good man for not raping women. Why aren't more men standing up and shouting about how angry they are at being represented like animals who can't control themselves? Why aren't more men offended by this?

A woman who is unconscious because of alcohol consumption does not deserve to be raped. Allowing this type of behaviour to pass as evidence of a 'good man' puts more women and children at risk of sexual violence. This not an example of Jim Davidson being a good man.  We shouldn't be celebrating this. We should be very, very worried.

‹ The term “child sex party” is inaccurate and offensive Women Prisoners: An Experience of Crime & Punishment ›

One thought on “Jim Davidson brags about not committing rape.”