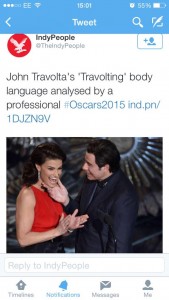 I don't follow the Oscars, it's not my 'thing' but it's difficult to avoid when you're scrolling through Twitter.

The one 'thing' that stood out from the talk of dresses and who won what and who was robbed ... Was the behaviour of John Travolta towards the actors, Scarlett Johansson and Idina Menzel. You didn't need to be there to almost feel their discomfort at his physical invasion. It is an unspoken etiquette that you do not touch someone else without their permission - verbal or otherwise.

The Independent newspaper asked body language expert Judi James what she thought of what John Travolta did. I read the piece with the expectation of her highlighting his awful behaviour towards Scarlett Johansson and Idina Menzel ... The chin grasping of Idina was particularly troubling... But no! Judi James 'felt sorry for him' and said these women should have shown him 'a little leeway' due to his veteran status.

Absolute rubbish! In her own words, Judi James admits that this must of been humiliating for both Scarlett and Idina. I'm no expert on body language but I don't think you have to be to see how uncomfortable both women felt. And to call it a 'little faux sexual fooling' only serves to add to my horror over what happened.

This is what I would have said about John Travolta's behaviour:

He thought he could use his status as a veteran Hollywood actor to touch two women who were not remotely engaged in having any physical contact with him. When he felt that Idina wasn't quite 'on board' he grabbed her chin in an act of male aggression. These are actions of a man who has way too much privilege and feels that he can get away with groping the talented Scarlett Johansson and Idina Menzel in the full glare of the media. It would appear that he is correct as no one is talking about having him arrested.
Just another day in the life for women across the world. We are not seen as people to be respected, we are seen as decorations who can be poked and prodded without a second thought as to how we feel.

‹ A ‘light-hearted look at who killed Lucy Beale’ Rape: How is it Still Allowed? ›