How did The Times newspaper respond to a complaint?

One of our campaign supporters, @InHollysKitchen, wrote a complaint to The Times newspaper following their article written by Prof David Nutt, discussing alcohol. The image below was the main area of concern, specifically the comment 'It's the drug that's going to get their daughter raped': 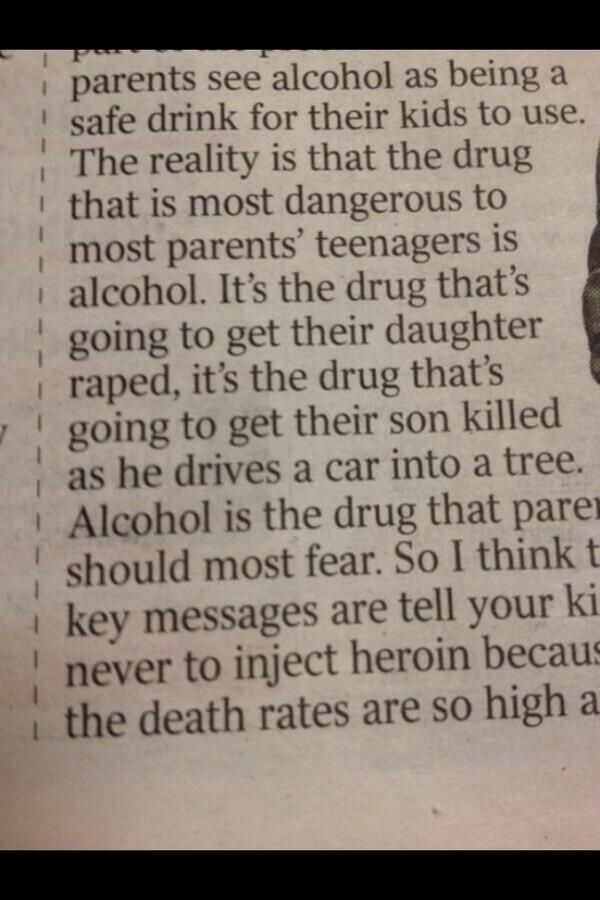 I am writing with regard to an article you published on Monday 18th November in the Times2 section. It discussed Professor David Nutt and his work to create a synthetic alcohol. It went on to detail why, in the Professor's opinion, alcohol is very dangerous and included this sentence: 'It's [alcohol] the drug that's going to get their [parents] daughter raped'. I would like you to print a correction immediately.

This kind of statement is simply not true and only contributes to a culture of victim blaming that is damaging the lives of countless people who have experienced sexual violence or abuse. To imply that because a woman is drunk is the reason she would get raped is ludicrous and categorically incorrect. Both women and men get raped not because of anything to do with their own behaviour, but because there are RAPISTS in existence. For Professor Nutt to imply otherwise, and for yourselves to print this statement, is wrong.

Just over a week later (Tuesday 26th November), The Times printed 3 articles/pieces discussing sexual violence and the need for a change in culture:

I want to reference number 3 in particular. The Times is a media partner for the Bruntwood Prize for Playwriting. The prize has been awarded to Anna Jordan for her play Yen which explores what happens when young men are exposed to violent pornography and video games. As a reader I am confused as to how you can be supportive of works that aim to challenge the increasing damage caused by 'porn-culture' yet also print a piece that states girls who drink alcohol will get raped? You are giving mixed messages. And I urge you just to give the correct one.

To repeat, girls (and men) get raped because there are rapists. NOT because they drink alcohol.

I will be forwarding this email to Professor Nutt and asking him to issue a retraction as well as recommending he spend time researching and talking to campaigns such as http://everydayvictimblaming.com. I'd also like to recommend that you become aware of their work so as to not make a similar error again.

I look forward to your response,

This response was received from The Times:

There is no reason for a correction or retraction of the remarks made by Professor Nutt and there is nothing in them that suggests women are at fault if they are raped.

The professor was discussing the danger of alcohol abuse in the young, and the responsibility that parents have for educating their children about it.

There is no inference of "victim blame" here. Surely any parent who failed to warn their children that being drunk in public is likely to increase their vulnerability and reduce their ability to look after themselves would be seriously lacking in common sense.

So, there we have it. 'There is no inference of "victim blame" here.' A particularly dismissive comment to make, when the detailed email made it clear that language such as alcohol 'get's their daughter raped' is victim blaming.

It seems to us that The Times feedback team could do with some training on reporting sexual violence, as well as how to respond appropriately to customer complaints. In addition to this, they need to acknowledge that victim blaming is insidious, that we often don't realise we are doing it, and how damaging it is to continue to perpetuate these myths. As it is clearly a waste of time to complain to The Times feedback team, we're hoping some publicity on social media will draw their attention to their error and will allow them to reflect on the skills of listening and hearing, skills that appear to be absent in this case.

6 thoughts on “How did The Times newspaper respond to a complaint?”