How @CastlePromotion set the anti-domestic violence cause back decades

Update (admin) Castle Promotion have apologised and are withdrawing the product.

The statistics tell the story. Violence against women is an epidemic worldwide - according to the UN, 35 per cent of women experience it. In the UK, seven women die at the hands of a current or former partner each month. In Australia, it's four women a month.

Castle Promotions' bumper sticker strips domestic violence back to the bare bones of control: a man annoyed by his partner's talking to him can push her out a window or through a wall and be done with his 'problem'. Violence is used to control the woman and her behaviour 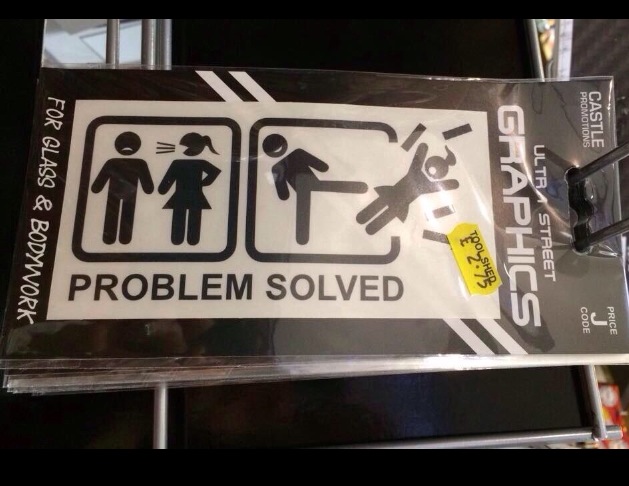 Domestic violence is a choice and the smile on the man's face as he pushes the woman makes this 'funny'; it's meant to be amusing. There would be many men and women - those who are survivors, those whose loved ones have experienced domestic violence, or simply concerned citizens - who wouldn't find it amusing at all. There would also be domestic violence survivors - survivors of trauma - who would experience overwhelming and immediate reminders of their trauma (known as 'triggers') when seeing these kinds of images. This is reckless and irresponsible 'creativity'.

There is insufficient outcry when so many women suffer and die as a result of domestic violence. Sadly, it is our attitudes that mean women's lives are somehow of lesser value. It isn't just perpetrators of violence who are the problem. We all have a role to play. It's in the way we teach our children about respectful relationships, whether we laugh at sexist jokes when we hear them, whether we react when we see abuse happening in front of us, or whether we laugh or are appalled when we see 'jokes' about domestic violence such as this vile bumper sticker.

Every little bit counts. The fact that this sexist incitement of violence made it past some 'creative' type's sketch pad is astounding.
It should be pulled from Tool Shed shelves and discontinued as a a Castle Promotions product. While you're at it, Castle Promotions, please donate the value of what you paid to produce this vileness to your nearest domestic violence shelter. They protect women who suffer the direct consequences of your idea of a 'joke'.