This piece featured in Thursday's Mirror (17th  January 2014) which I feel raises some important issues, however, they are juxtaposed with victim blaming and male violence against women and girls minimising language and sadly consequently, dilutes the messages therein. Even the main headline omits the word ‘child’, which is after all what this is about: child rape and sexual abuse.

Sub-Headline: The news is currently full of coverage of several high profile trials over sexual misconduct. Here are five things you should know about sexual abuse in Britain.

Sexual misconduct?! How minimising not only of the deliberate actions of the perpetrator to sexually abuse and rape children but also of the impact on those who are targeted. We’re talking about child rape, child abuse, grooming and sexual assault, if the author is indeed referring to the current high profile trials of Dave Lee Travis, William Roache and the Peterborough organised child sexual abuse and rape case, where the Crown Prosecution Service is quoted as stating that it was ‘one of the worst examples of child sex abuse it had ever seen’. So, assuming that these are the trials being referred to, how on earth can they be described as ‘misconduct’? The aforementioned trials, incidentally, have all been reported in the same week that a Philippines child sexual abuse internet ‘ring’ was exposed. Sexual misconduct? I don’t think so. Nul points.

Headline 2: 1 in 20 children have been sexually abused
Media coverage tends to make parents wary of “stranger danger”, but the figures, released by the NSPCC, show that over 90% of children who have experienced sexual abuse were abused by someone they knew.

This is true and an important point which is further elaborated by Ending Victimisation and Blame in their response here. However . . . the next section features a bar graph about the extent of child sexual abuse in England and Wales referring to ‘sex crimes’ in the heading, thereby conflating child sexual abuse and rape with sex. ‘Recorded’ is they key word here, as we now, which the article does not highlight, is that the vast majority of victims of child sexual abuse do not disclose, however, this is not made clear at all, so once again, this is very misleading. 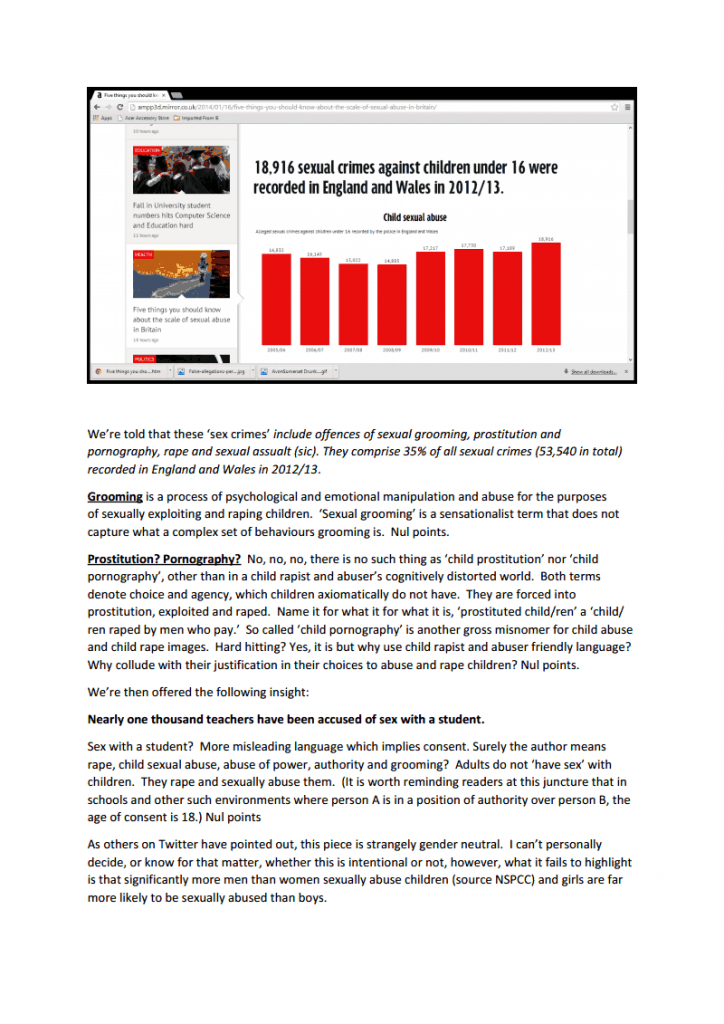 We’re told that these ‘sex crimes’ include offences of sexual grooming, prostitution and pornography, rape and sexual assualt (sic). They comprise 35% of all sexual crimes (53,540 in total) recorded in England and Wales in 2012/13.

Grooming is a process of psychological and emotional manipulation and abuse for the purposes of sexually exploiting and raping children. ‘Sexual grooming’ is a sensationalist term that does not capture what a complex set of behaviours grooming is. Nul points.

Prostitution? Pornography? No, no, no, there is no such thing as ‘child prostitution’ nor ‘child pornography’, other than in a child rapist and abuser’s cognitively distorted world. Both terms denote choice and agency, which children axiomatically do not have. They are forced into prostitution, exploited and raped. Name it for what it for what it is, ‘prostituted child/ren’ a ‘child/ren raped by men who pay.’ So called ‘child pornography’ is another gross misnomer for child abuse and child rape images. Hard hitting? Yes, it is but why use child rapist and abuser friendly language? Why collude with their justification in their choices to abuse and rape children? Nul points.

Nearly one thousand teachers have been accused of sex with a student.

Sex with a student? More misleading language which implies consent. Surely the author means rape, child sexual abuse, abuse of power, authority and grooming? Adults do not ‘have sex’ with children. They rape and sexually abuse them. (It is worth reminding readers at this juncture that in schools and other such environments where person A is in a position of authority over person B, the age of consent is 18.) Nul points

As others on Twitter have pointed out, this piece is strangely gender neutral. I can’t personally decide, or know for that matter, whether this is intentional or not, however, what it fails to highlight is that significantly more men than women sexually abuse children (source NSPCC) and girls are far more likely to be sexually abused than boys.

Words have power. They have the power to reflect and minimise the harsh realities of male  violence against women and girls. Use them responsibly.