DrinkAware? Some victim awareness too please! 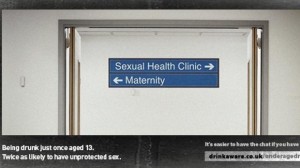 In wider society, there is nothing inherently wrong with promoting the responsible consumption of alcohol. In a worst-case scenario alcohol becomes an addiction requiring medical treatment. However, there is much wrong with the latest campaign poster from DrinkAware, and the messages it promotes are harmful to girls and women, and a get out of jail free card for perpetrators.

The image depicted is that of a hospital corridor, with two arrows pointing in opposite directions towards the Maternity Ward and the Sexual Health Clinic respectively. Written across the poster is the caption;

“Being drunk just once age 13. Twice as likely to have unprotected sex.”

This poster explicitly blames young girls regarding the possibility of getting drunk and pregnant through unprotected sex. However, sex is not a singular act. It is a plural one. This poster erases completely the responsibility and role of men in a drunk 13-year-old becoming pregnant. It is their responsibility not to engage in sex with a girl or woman who is drunk and in the scenario outlined on the poster it would also be an illegal act. Also, it does not provide a source for its claim that girls are twice as likely to have unprotected sex

But we live in a victim blaming culture, and this poster places the sole blame on teenage girls. It does not say anything at all about the role of men and boys in taking advantage of intoxicated girls, nor does it address their responsibility to be in control of their actions.

The finger wagging, paternalistic tone struck by this poster is extremely disappointing, and it does nothing to encourage girls who may have been raped while under the influence of alcohol to come forward to authorities if they want to and speak about their experiences.

This poster is pure blackmail. In terms of its subtext, it says “just once age 13 is enough and it is all your fault you silly girl!”

In wider society, we love to shame and condemn women and girls as that poster does, yet we turn a blind eye, or even reward boys and men for bad behaviour.

There is something else wrong with this poster is. We have two arrows pointing in opposite directions, firstly towards the Maternity Ward and secondly towards the Sexual Health Clinic.

This gives the impression that there are only two outcomes with respect to unprotected sex. The complete erasure of boys from the campaign may cause you to believe that it is women alone who are responsible for these outcomes, when in fact men bear the responsibility to.

Turning first to the maternity ward the poster completely neglects to mention the option of abortion, an option which any responsible clinician would discuss with a girl faced with this scenario, and any responsible campaign should make girls aware of this possibility too.  To frame pregnancy as a consequence over which a girl has no control is disrespectful and damaging to women, and irresponsible on the part of DrinkAware.

Overall though, this campaign makes me feel extremely uncomfortable. It gives the impression that women are totally responsible for unwanted sexual advances (ergo rape) and for the consequences. It blames them totally for drinking alcohol at a young age, despite the fact that a man may be buying it for them and taking advantage of the situation, yet there are no equivalent campaigns warning men of the dangers of having sex while drunk, and telling them to keep it in their pants.

This campaign leaves women isolated and at sea. It plays on the politics of fear and shaming women. Yet sadly, this campaign represents a missed opportunity. It could have been used to educate women and girls about the support that is out there for rape victims who have been raped while under the influence of alcohol. It could also have been used to educate them about the help and support that is out there in the event of unwanted teenage pregnancy.

As it stands this campaign poster is damaging. It blames the victim for a traumatic ordeal, and renders invisible every male perpetrator. As such it is serving no other purpose than to be a servant of patriarchy and I would advocate for its immediate removal. I would also ask DrinkAware to be more careful planning future campaigns with how it uses language to avoid belittling, victimising and shaming rape victims.

‹ This is rape culture: Comments submitted to the site .@Telegraph blames a child for her sexual exploitation ›

5 thoughts on “DrinkAware? Some victim awareness too please!”