David, what type of story is this? (An open letter to David Dinsmore, on his second day as Editor of The Sun.) 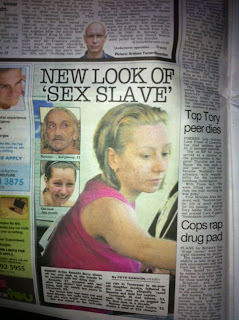 I write to you in reference to the article in The Sun, pictured above, published on 24th June 2013. The article reads:

Kidnap victim Amanda Berry shows off her new look as she travels to be reunited with her dying Dad.
Amanda 27, escaped with two other "sex slaves" last month after being held for nearly ten years in Cleveland, US.
Her brown hair had been cut and dyed blonde, her nails were painted and she wore bright new clothes."

Firstly David I'd just like to clarify; Amanda Berry never had any sex during this period, she was Raped.

The fact she has been dubbed the 'Sex Slave' is, I'm sure you can appreciate, extremely insensitive, irresponsible and of course inaccurate.

I am positive you can see how badly it affects other Rape victims when you compare the experience of being raped to having sex. Especially considering there are over 600,000 reported rapes in UK every year.

Incidentally, I wonder how necessary it was to use this term twice in one article? Hopefully this is something you will clear up with an apology, in the not too distant future.

Lastly, I'd like to know why her appearance should be of any concern to the people of the UK? What exactly were you trying to achieve here?

I'd really love to hear your thoughts on this.

Please send your reply to afeministe@gmail.com

2 thoughts on “David, what type of story is this? (An open letter to David Dinsmore, on his second day as Editor of The Sun.)”