An open letter to Ally Fogg: childhood sexual abuse is not a laughing matter

An open letter to Ally Fogg: childhood sexual abuse is not a laughing matter

This week has seen some lurid and inappropriate reporting of the trial of publicist, Max Clifford.  Now, let us just remind ourselves of why Clifford is on trial.  He is on trial for 11 charges of indecent assault allegedly committed between 1966 and 1985, the alleged offences relate to seven different women and girls ranging in age from 14 to 19. (‘Indecent Assault’ is the legal terminology of the 1956 Sexual Offences Act, superceded by the 2003 Sexual Offences Act and would now be referred to as ‘sexual assault’, however, his alleged crimes predate the new Act, so he is being prosecuted under the offences at the time that he allegedly committed them).

We’re told that the jury couldn’t stop laughing about Clifford’s penis size.  Really? I cannot begin to imagine how the survivors must feel about having their experiences served up as cheap Carry On and Benny Hill entertainment.  Well it seems that not only jurors could contain their mirth about the testimonies of alleged child sexual abuse survivors but journalist Ally Fogg decided that he would write an Indy Voices piece about ‘cock size’ and the mighty phalllus;  strangely coincidental that given the numerous lurid tweets and  headlines but there are also 3 so called Max Clifford’s penis size are now active: 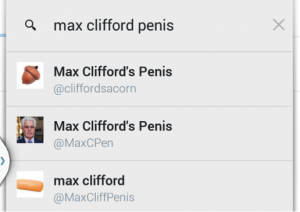 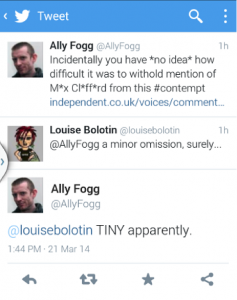 I am also apparently humour fodder: 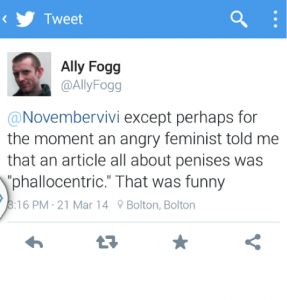 By the way, he misses the point here (no pun intended) as my response was about the inappropriate timing of said article when penis size has not only dominated the reporting of a child sexual abuse trial, all week, but it has eclipsed the severity of Clifford’s alleged crimes.  Given that it is alleged that Max Clifford’s penis was used as weapon to abuse and intimidate and assault young girls and women, how on earth can Fogg’s piece be remotely appropriate?

Other tweeters expressed their disgust.  Here are a few quotes:

Is this really the level we’ve descended to in this country, laughing at a child abuse trial?

What’s the matter with people?

. . . I was wondering when I had ever devoted a newspaper column to my vagina. That would be never.

One would almost conclude that sex offence against girls and women ren’t taken seriously. But surely not?

Taking women seriously has been shoved to one side nd utterly trivialised in favour of some cheap Carry On giggles.

Like rape is only rape when it’s scary, violent, stranger, and this is somehow funny not horrific bc he’s got a small penis?

And no one expects the Spanish Inquisition, do they, Ally (see what I just did there?)?

Let us just remind ourselves of what this trial is really about:

It's taken me 35 years to write this letter so hopefully it will reach you. I believe it will as anyone opening this email/letter should realise just how important and significant this correspondence is and pass it to you. Too dangerous to fall into the wrong hands, too serious not to inform you of its existence.

You will not be surprised by it as you have often said that you are amazed that 'things haven't surfaced'. I wondered if you remembered as I do the child sexual abuse you engaged in, befriending my parents, flattering their daughter, talking of an acting/modelling career, offices near Bond Street.

They were impressed even though no-one had heard of you. Conversations about your friend Tommy Steele, wasn't it squash you played. Julie Christie and the new Star Wars film that was soon to hit the cinema. Lots of famous names, places and yet still down to Earth. A local lad done good.

Recommending restaurants, funny stories, little secrets you fed them to gain their trust. The abuse started in your office. You sat behind your desk, eventually persuading me to strip, convincing me that my protesting was ridiculous and very childish. 'Don't you want to be grown up?'

You took pleasure in degrading me, visiting me at home, taking me out to meet fictitious people, abusing me instead and returning me to my home with a story so my parents didn't become suspicious. Names of people we had met, places we had been to, so they would be fooled that their daughter was in safe hands and not those of a paedophile.

The abuse continued. A friend's flat where you wanted me to act out a scene. You raped me. You blackmailed me with lies about photographs that had been taken. Fooled me into believing that you were somehow protecting me by stopping them from being published. Even inventing another person who telephoned and continued with the pretence and demanded that I talked dirty to them.

What was his name? That's right Max, pretending to be Terry. I had no-one to turn to. You were very clever. A+ in grooming children. How proud you must be. What chance did I have? You made my life a living hell, up until the point when I even contemplated suicide. You got worried then and backed off.

Too dangerous for you. You might have been found out. You repulsed me then as you do now, wearing the mask of someone who has values, hiding behind charity work, trying to cleanse yourself of the guilt you must feel perhaps and stating that you don't have sympathy for paedophiles.

You pretend to be normal. But you know inside you're not and you will never escape that shame. It must feel horrible to know that the real you is so vile and repulsive. It must be frustrating that you have no-one to talk to about that. Perhaps you've even tried to bury the memories, almost fooling yourself that you are a different person now.

Better than that, convinced yourself almost that it didn't happen, or does it continue? Are you still abusing children? I remember driving, pulling up behind you at traffic lights in Raynes Park, you in your yellow Jag, so obvious that it was you. What to do? Wanting to get out of the car, confront you, let you know that I still remember, wanting everyone to know the real disgusting creature that you are.

I wonder what your daughter would think of you if she knew or perhaps she does know and it's a secret that you share. How terrifying for you knowing that you have so much to lose. She was a child when I was a child. Perhaps you abused her too, or did you draw the line there.

Perhaps you've made excuses, fed her a line, and you think she's fooled as well. If she does suspect, maybe she's not ready yet to face the reality, too painful, too horrific, every little girl's worst nightmare. Of course one day she will find out the truth and perhaps you won't be around to beg her forgiveness or to feed her the excuses or blame someone else.

What an awful memory she will be left with. I truly feel huge sympathy for her. I can't imagine how unbearable it would be to find out that your father was a paedophile. It would probably ruin her life and certainly make her doubt everything about your relationship. You may have gotten away with it for years but inside you can't escape from the monster that you are, the repulsive, vile reality, that terrible, festering secret of yours which burdens you.

Your secret, not my secret. The hypocrisy of your life. You say you can't bear hypocrisy and that is what spurs you on, when you yourself are a hypocrite worse than any of those you seek to shame. A paedophile who publicly condemns other paedophiles to divert attention. A double bluff. How many others like me are there out there?

I shudder to think of all those opportunities that you've had/have to groom more children. All the time wearing that mask. Shame on you. Part of the reason I'm writing to you is that my counsellor has recommended it as part of my therapy. I'm undecided how much it will help or where we go from here.

Do not turn into this into some ghastly sideshow and erase the victims’/survivors’ experiences and the impact that this has had on them.  There is a very strong sub-text minimising and trivialising the alleged assaults due to Clifford’s (what many deem laughable) penis size.  Were those girls and young women laughing at the time this allegedly happened to them?  Are they laughing now?

Child sexual abuse is never and I repeat, never, a laughing matter.

If you are affected by this, you can contact Rape Crisis or NAPAC for support.

‹ “Jealousy” is not a mitigating circumstance. “Underage sexworkers” do not exist. ›

6 thoughts on “An open letter to Ally Fogg: childhood sexual abuse is not a laughing matter”