A poor understanding of the dynamics of sexual exploitation

Media coverage of Child Sexual Exploitation (CSE) cases, has been widespread in the past couple of years which has been a key aspect in raising the profile of the sexual exploitation of children, but this reporting has not been without it's problems. Notably, there has been a focus on CSE by groups of Asian, predominantly Pakistani men, pushed by irresponsible reporting from the Times, amongst others and leapt upon by groups with ulterior motives, such as the BNP. It is a widespread belief amongst the general public, as a result, that this kind of abuse is exclusively perpetrated by Asian men towards white British girls, a misconception that is as damaging as it is wrong.

Take the coverage of the Operation Bullfinch case in Oxford. When the trial reached it's conclusion, details of the case and the seven Asian men convicted of the abuse reached all corners of print, web and screen. By contrast, the ten men from North Yorkshire convicted
of similar offences some time afterwards, was reported only in local news and did not scratch the surface of national news headlines. Could it be that the reason why was that the perpetrators were White British men? Quite possibly and this feeds into the view that the perpetrators of this crime are solely Asian men.

So what's the problem? Well, we know that offenders of CSE-related offences come from all socio-economic backgrounds, all ethnicities and there is no one specific group that is responsible, nor exempt from engaging in this criminal, abusive behaviour. Nor is there any such demographic for victims of this exploitation. Organisations such as Barnardos, Safe and Sound in Derby and Basis in Leeds have, for a long time, been reporting that the majority of the offenders they are aware of, are White British.

This isn't simply a case of being sensitive about race and ethnicity, nor overlooking offending behaviour because of fears of causing racial tension. Clearly, regardless of the race or ethnicity of offenders, offending behaviour should be tackled and the offenders in Op Bullfinch are in the right place, given their callous abuse over a significant period of time. The issue with this focus on a small proportion of offenders is that it means those who come from different groups are often not dealt with and their abuse continues. If the public believe offenders are exclusively Asian men, they are less likely to report concerns about other groups of men. This spills over onto professionals within their work, whereby they become acutely aware of issues of exploitation from groups of Asian men and are blind to similar concerns relating to offenders who are from other backgrounds. This presents obvious problems as the vast majority of offenders then go unrecognised.

It becomes expressly important for there to be a sound understanding of the issues relating to the activities of offenders and the vulnerabilities of young people, amongst professionals working in this field, which is why this advertisement on Community Care's website, was extremely concerning; 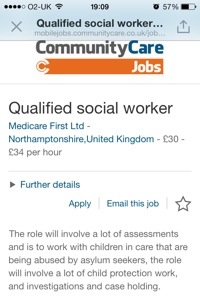 There can be no question that Looked After Children have unique vulnerabilities that make them susceptible to abuse and taking steps to employ a worker to deal specifically with issues related to CSE for this group of young people in the Local Authority's care, can only be a positive step. What chance, though, of employing someone with a good grounding in CSE when the advert itself demonstrates such a narrow, blinkered concept of the issue? How likely is it that children who are victimised in Northamptonshire are exclusively targeted by asylum seekers?

If this is the level of understanding about CSE from a service provider, is it surprising that the wider public are struggling to terms with it and, more importantly, is it surprising when more children are being discovered to have been suffering abuse, under the noses of professionals, with no effective intervention?

This advert shows a poor understanding of the dynamics of sexual exploitation and buys into the racist agenda pushed by the likes of Andrew Norfolk's Times articles, stigmatising asylum seekers and categorising it as an offence that "those foreign types" get up to. It is time that professionals, above all people, had a better grip on the issue than that. How is it possible to protect children in care, or those at home come to that, without having at least a reasonable understanding of the nature of CSE, the way it is perpetrated and the way agencies have, in the past, failed to protect? Quite honestly, it isnt. There needs to be giant strides in understanding how to tackle CSE on the part of many Local Authorities, Northamptonshire being right up there, on the basis of this ad.

Community Care jobs responded to a tweet pointing this out by saying: "Thanks for the feedback, we are in touch with the advertiser to get a JD that is more descriptive of what is involved in the role" as a result of which, the advert was amended to state: "This position is to work with Asylum Seekers who are potentially vulnerable and potentially at risk."A hugely different discription, which begs the question about what the initial job brief was about in the first place.

It is vitally important that child protection agencies not only protect children with a mind to relevant and current understanding of threats to children and young people, but that they are seen to do so as well. Such a clumsy, bordering on racist, job advert, instills no such faith that this work is going on.