“Who is Daniel Holtzclaw” : on media taking responsibility for supporting rape culture

Today, we were sent a link to an article about convicted rapist Daniel Holtzclaw in SB Nation, which is an online sports media brand. The article had been removed owing to its appalling content. The formal response from SB Nation is as follows: 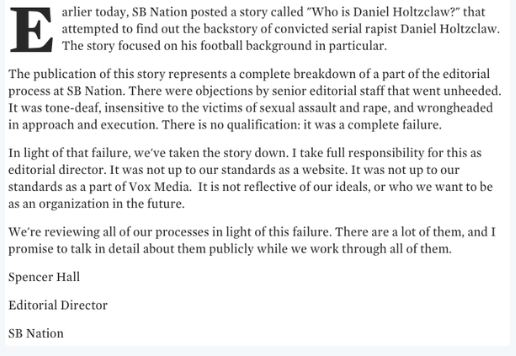 We've seen media pull articles before but not a response quite so honest to the failures of the article, which we've since read as there is an archive version available here. Clearly, there were some serious failures within the editorial board and the journalist involved, Jeff Arnold, clearly needs some immediate training or a formal ban on ever writing about sexual violence. That it was published is an absolute disgrace, but we are heartened to see a media brand take corporate responsibility for the ways in which they support rape culture - in this case by excusing Hoytzclaw's behaviour and erasing the victims.

One thought on ““Who is Daniel Holtzclaw” : on media taking responsibility for supporting rape culture”