The sentencing of Brock Turner is rape culture, but there is another issue at stake.

Brock Turner was "convicted of 3 felonies, including assault with intent to rape". Despite the tariff for these felonies being a maximum of 14 years, Brock was only sentenced to 6 months in county jail and will be on the sexual offenders list for life. The judge Aaron Persky "said said positive character references and lack of a criminal record had persuaded him to be more lenient" and that "(p)rison would have a “severe impact on him”.* There was physical evidence and multiple eyewitnesses to the assault but Brock may only spend 3 months in county jail rather than 6 years in prison that the prosecutors were asking for because holding white, wealthy men accountable for their actions is an anathema to our culture.

Buzzfeed has published the full victim impact statement here. It is a clear demonstration of how wealth and whiteness allow men to use the criminal justice system to blame their victims. As it stands, the global criminal justice systems are simply not fit for purpose in dealing with crimes of sexualised violence. Far too much time is spent worrying about the impact on men accused of sexualised violence. We see this in demands that men deserve the right to anonymity because being accused of rape is apparently worse than being accused of any other crime, including murder of your own children. Very few cases of rape are actually prosecuted and many women and children have, justifiably, no faith in a system - starting from police failing to investigate reported crimes based on the assumption that all women are liars. The weight of the system remains in support of the accused allowing victims to be harassed, intimidated and denigrated in the media and in the court.

Brock's sentence of 6 months and probation is simply not surprising when dealing with a wealthy, white male perpetrator on a college campus who had the potential to be an Olympic athlete in swimming. There is a new trend that we've seen increasingly over the last few years that appears in Brock's father, Dan Turner, statement for pre-sentence hearings asking that Brock receive only probation. Because he's stopped eating steak: 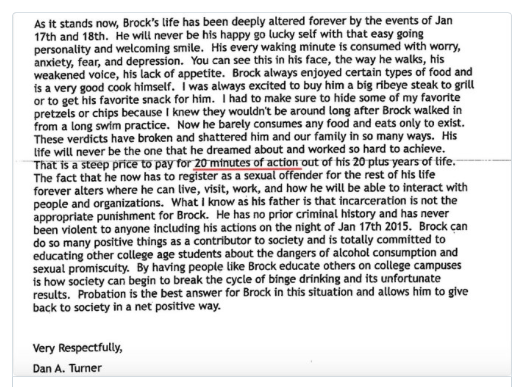 That Dan Turner doesn't think rape is a big deal isn't surprising. The fact that Turner thinks Brock should be allowed to teach other college age students "about the dangers of alcohol consumption and sexual promiscuity" as though rape were nothing more than having sexual intercourse with more than one partner in your life isn't surprising either. There is a UK based training program called Prevent, Inform and Protect (PIP) training designed not to teach professional footballers that being employed by a Premier League football team is not a license to commit sexualised violence, but to teach them how to behave if they are prosecuted for rape. As with PIP, Turner is blaming his choice to commit sexualised violence on alcohol. Alcohol does not cause sexualised violence. Men use alcohol has an excuse to prevent taking responsibility for their crimes - Scottish Women's Aid term this "cultural permission giving".

Our worry is not just that Brock's short sentence fails to recognise the severity of his crime or that that the judge clearly believes that prison isn't fair to wealthy, white men (and we'd be very interested to see the sentencing of other men given by Persky - we doubt very much a young Black man attending college would have received such a lenient sentence). We worry that colleges and universities will allow Brock return "to educate others ... (to) break the cycle of binge drinking and it's unfortunate results" as his father suggests. Sexual harassment and rape on college campuses is rife in the US and the UK. We aren't seeing a move to challenge male entitlement and 'cultural permission giving' on campuses. Instead, we're seeing categorical refusals to recognise sexualised violence as a crime, male entitlement, male bonding, and affluenza constructed as excuses (poor boys didn't know that rape was really all that big a deal), and an increase in the harassment and abuse of women who report their experiences.

Brock Turner's sentencing isn't all that surprising in a culture that holds women accountable for the actions of men. A judge worrying more about the impact of prison on a rich, white male than on his victim doesn't shock us either. That we are suggesting that these very men should be allowed to teach other college students (and footballers) how to commit rape without consequence is a new part of the backlash to feminist campaigns to end rape culture. PIP already have access to teenage supporters of Premier Football clubs. How long will it be before Brock Turner is getting paid to talk to college athletes on how to blame alcohol and avoid real prison sentences for committing sexualised violence?

*Quotes taken from this Guardian article by Elle Hunt.

3 thoughts on “The sentencing of Brock Turner is rape culture, but there is another issue at stake.”