Three days ago, we started a survey asking people to comment on the 5 worst offenders we've seen in police 'safety' campaigns. Clearly, we started the survey too early as our twitter feed contained contributions from Bedfordshire police and the following from South York Police using the #noregrets hashtag. 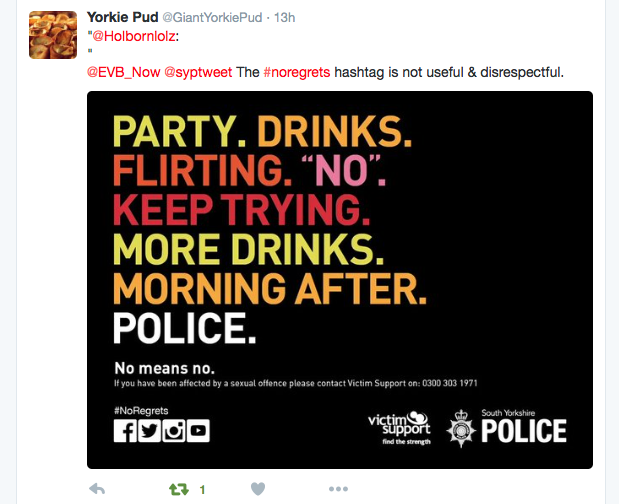 These are actual tweets using the #noregrets tag demonstrating fact that South Yorkshire Police understand neither rape culture nor social media. Conflating rape with someone suffering indigestion having eating too much pizza or chocolate is incredibly offensive, dangerous, and lacking in all empathy for people who have experienced sexual violences; as this sample of tweets makes clear:

Rape is not about 'regret' it is a criminal act perpetrated, most frequently, by a man making a choice to commit rape. A man who "keeps trying" with a woman who has said no is engaged in a pattern of sexual harassment that leads to rape. It is the essence of male entitlement.

Using the word regret erases the perpetrators choice and blames the victim. These type of campaigns are exactly why victims of rape and sexual assault do not report to the police. It simply isn't good enough. 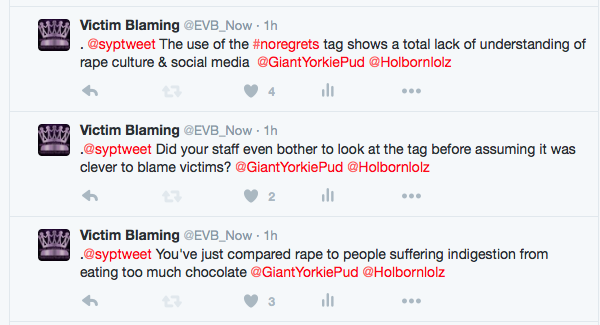