Rape is not a crime about sex: It is about male entitlement and power

The Hampshire Constabulary and Thames Valley Police are currently running a new rape prevention campaign entitled Don't Cross the Line. Along with Police Scotland's Sex without consent is rape: We can stop it , SAVE: Sexual Assault Voices of Canada* Don't be that guy and numerous campaigns by Rape Crisis Scotland, the campaign is targeted at perpetrators. The latter three are very well designed campaigns that do not engage in victim blaming language and focus on the issue of consent when alcohol is involved.

These campaigns are particularly important during the December festivities when the police engage in overt victim blaming through inappropriate and inaccurate "safety" campaigns. Last year's winning entry for sheer offensiveness was South Wales Police for this poster: 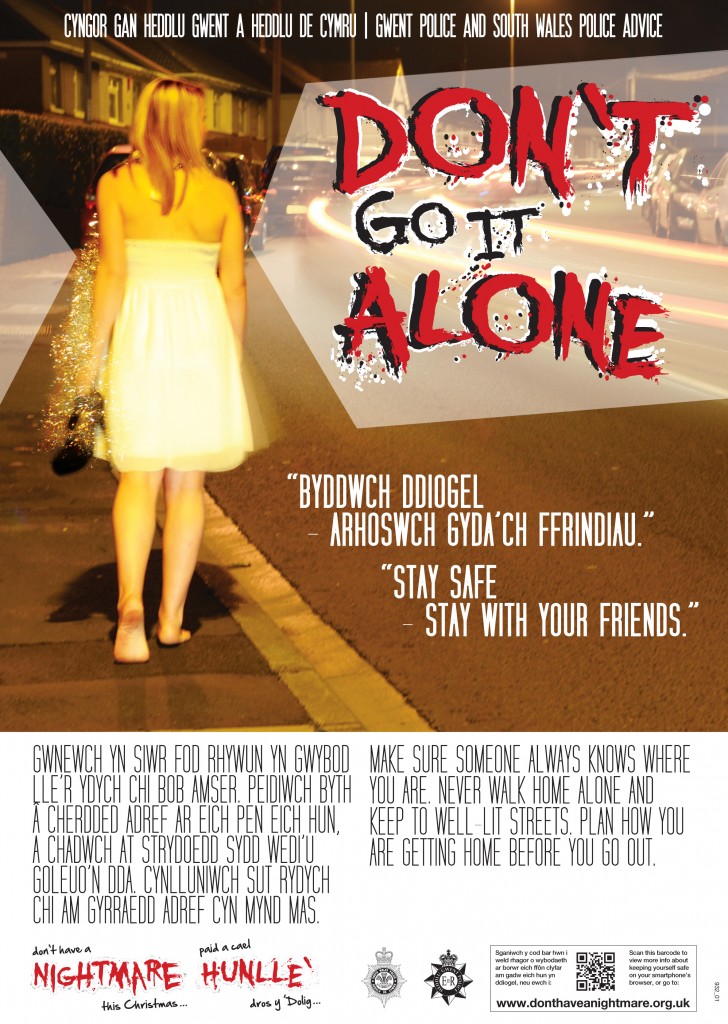 although the "Christmas poem" published on the Nottingham Police website is still a contender for the Most Offensive Poetry category: 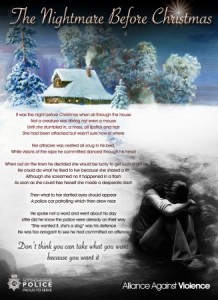 Considering the sheer number of people who seem to wilfully misunderstand what consent actually means and the continuing inability of the police to focus on the perpetrator, we are so pleased to see police forces tackling these issues by engaging with specialist services and developing perpetrator-focused rape prevention campaigns.

We need campaigns which make it clear that consent is not difficult to understand. Children legally cannot consent to sex. Teenagers can consent to relationships with other teenagers (although consent within our current culture puts undue pressure on teenage girls that can render consent meaningless when examined appropriately) but they cannot consent to adults in a position of power - and we include celebrities within this construction of power.

The Hampshire Constabulary and Thames Valley Police focuses on the perpetrator but they construct a perpetrator who lacks agency. This problematic construction appears on the first page:

Almost half of all rapes reported to Hampshire Constabulary and Thames Valley Police involve two people who know each other. This is called acquaintance rape. The aim of Don’t Cross The Line is to raise awareness of the chain of events that can lead to rape, dispel common myths and provide information that will enable you to make the right decisions.

Ultimately, it’s about keeping you and your friends safe.

There is almost a contradiction in the two paragraphs. Paragraph two suggests that the campaign is aimed at protecting women but the first refers to a "chain of events" and "decisions". We know the only person responsible for rape is the rapist. It is rapists who follow a "chain of events" in order to make the "decision", not victims. So, who is this campaign working to keep safe? Young men who perpetrate rape? Or, their victims - almost all of whom are women?

The consequences of these "chains of events" and "decisions" are:

Have sex with someone who hasn't said yes to it and you could end up going to prison, for rape.

The maximum sentence that a judge can impose is life imprisonment. But even if you don’t receive a sentence of this length, the conviction will remain with you for the rest of your life and you’ll be placed on the Sex Offenders Register.

We know that 85 000 rapes occur in England and Wales every year and that only 6-8% result in criminal convictions. The case of Robert Richards who was spared jail despite raping his 3 year old daughter because he was wealthy is a well-known US case but non-custodial sentences for sexual offences against children aren't unknown in the UK either. Ched Evans only served 2.5 years for rape despite it being filmed by his brother. It's hardly surprising to realise that most rapists commit rape because the entire system is set up to protect rapists and not their victims. Again, the harassment and stalking of the victim of Ched Evans is a case in point.

Have sex with someone who hasn't said yes to it and you could end up going to prison, for rape

doesn't cut it when one in four women over the age of 18 experience rape. There is no such thing as sex without consent. That is rape and any failure to make this clear allows rapists to excuse their "decisions". Rapists make a series of decisions in order to minimise the risk of being help criminally liable for rape.

Fundamentally, though, this is about male privilege and entitlement. These young men, who are the majority of perpetrators of acquaintance rape which is the focus of the Hampshire Constabulary and Thames Valley Police campaign, go out believing they are entitled to orgasm - regardless of how that orgasm happens. They may not view themselves as rapists but it is the entitlement and belief in male privilege which makes them rapists. Suggesting that they 'may' go to prison doesn't challenge their belief in their entitlement to sex. It doesn't challenge their underlying attitudes to rape and women's bodily autonomy.

We published a very important post last year from probation officer Effie Perine on male entitlement to sex, rape culture, victim blaming and how these interact to create rape culture:

...(e)specially where alcohol is concerned, sexual assaults and rapes are often characterised as impulsive decisions, a sudden rush of lust, a reaction to seeing a short skirt or tight t-shirt. What has continually struck me over the years at work is how often this is just not the case. There is a difference between opportunism and impulsivity: the vast majority of sexual offences I have dealt with have involved if not planning, then seeking the opportunity. Are they stalking darkened alleys with a knife and a balaclava thinking, “I am going to brutally rape someone tonight”? Hardly ever. Are they feeling a particularly strong sense of entitlement that night, a feeling that they deserve to have sex and it wouldn’t be very fair of a woman to refuse? A lot of the time, yes, and it’s not a coincidence that they find themselves loitering outside clubs where they might find drunk women, or visiting a friend they think has been giving them signals and might be up for it, for example. Where perpetrators insist an assault was actually consensual sexual contact, this impression of entitlement often comes over loud and strong.

Perine is clear that these perpetrators do not view themselves as rapists but that they have a massive sense of entitlement. This entitlement overrides any belief that they have about women's bodily self-autonomy (as small as that may be). The question, when dealing with this type of perpetrator, is how to get them to acknowledge the crime if they believe they are entitled to orgasm whenever and wherever they want? We need to examine the process of decision-making of perpetrators that contextualises their decisions within a culture of male entitlement and privilege.

We need to start targeting rape prevention campaigns at young boys making the consequences of male violence clear. This starts with eradicating the ridiculous myth that "boys only pull the hair of girls they like" which conflates male violence with sex. We need to ensure that mandatory sex and relationships education are written into the schools curriculum starting at nursery and we need a fundamental overhaul to the criminal justice system that recognises that rape and all other forms of sexual violence are the consequences of the decisions made by the perpetrator and not the victim.

We need the media to challenge myths about rape and we need them to hold police officers, and other members of the criminal justice system, to account. After all, it does not matter how well developed the rape prevention campaign is if the police officers investigating sexual violence give this quote to the media:

Detective Inspector Damian Simpson from the force's specialist Sexual Offences unit said: "Unfortunately we've dealt with many an incident whereby two young people have met on an alcohol-fuelled night out, one thing has led to another and the next morning we’re arresting somebody for rape."

The "one thing that led to another" is that a man made a choice to commit rape. Yet, a detective inspector working in the Manchester specialist Sexual Offences unit can still tell the press that it's the victims fault for being drunk. Would you feel comfortable reporting your rape to the police when you know that even the specialist sexual offences unit, those supposedly with the best training, still think it's the woman's fault for drinking alcohol? The complete erasure of the perpetrator from DI Simpson isn't unusual or surprising. This is the type of response many rape victims receive from the police.

Rapes perpetrated by young men acquainted to the victim are increasing, not because more women are reporting in light of the conviction of Ched Evans and investigation into Jimmy Savile, but because we live in a culture of male entitlement and access to women's bodies. 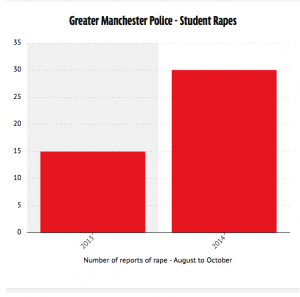 We need more safety campaign's like that of Rape Crisis Scotland: 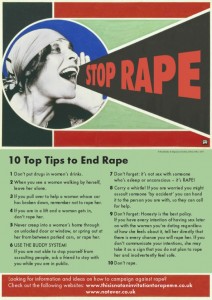 Victim blaming doesn’t just let perpetrators off light – it enables and emboldens them. Much of the work to overcome internal, psychological barriers to offending is being done for them, and they are allowed or encouraged to see external barriers like victims’ resistance as invalid or as part of normal sexual politics and gender relations.

The Hampshire Constabulary and Thames Valley Police's Don't Cross the Line doesn't go far enough in challenging the stereotypes, myths and entitlement within young men. Instead, it offers safety advice to women in the guise of targeting perpetrators and ignores the decision-making process of perpetrators which leads them to commit rape.

‹ Rape is not SEDUCTION ‘Shamed’ ›

One thought on “Rape is not a crime about sex: It is about male entitlement and power”