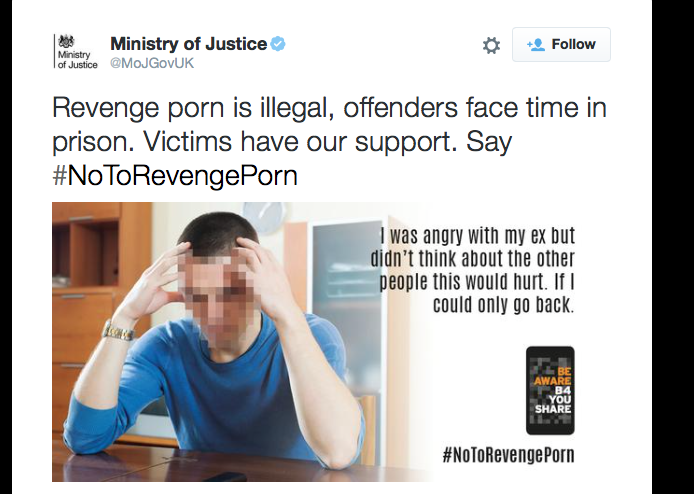 We're going out on a limb and assuming that the MOJ didn't bother to consult with a single expert from the women's sector since our sector would have been concerned about the impact on the VICTIM and not the perpetrator. Strangely, we can't actually see a reference to the VICTIM in this poster. Instead, the perpetrator seems upset about himself (with a pixelated face for reasons we can't fathom) and the impact of his criminal act on "other people". We're sure the parents and extended family of perpetrators are unhappy with their son/brother/cousin/grandson being convicted, however their unhappiness isn't actually relevant in this situation. What is relevant is the consequences for the victim.

Equally, we're extremely disappointed that the MOJ hasn't challenged the issues of anger, entitlement, and "revenge". Being angry isn't an excuse for any inappropriate behaviour, up to and including criminal acts. We need to start challenging toxic hyper-masculinity and entitlement which teaches men they have the right to be angry and exact revenge on women saying no and reinforcing their boundaries. Women have a right to end a relationship. Men do not have the right to "revenge" because they get dumped. If men are angry, that is there problem that they need to deal with. No one else is responsible for their anger or for "fixing" a situation so the man is no longer angry.

All in all, this is just a seriously crap poster.

‹ next of kin Jeremy Corbyn and the women-only train paradox ›