.@MerseyPolice and the small issue of a rape joke

Mersey Police's social media employee has tweeted out a rather interesting response to a rape joke. 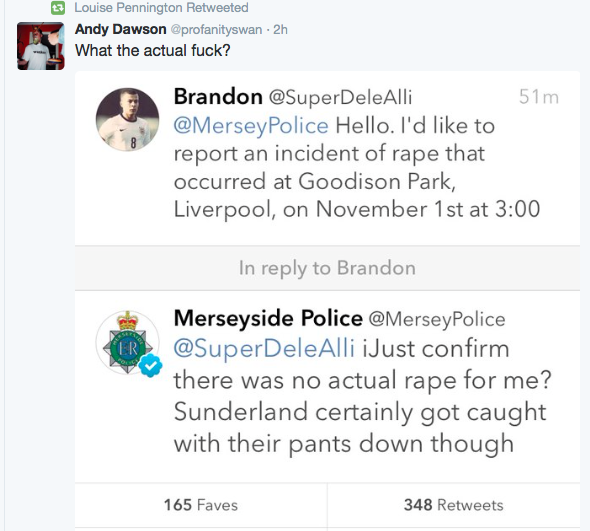 Whilst Mersey Police have since apologised, it was due to an immediate response from Twitter users. Without the immediate engagement of twitter users horrified by such a light-hearted response to a rape joke by an employee of the Merseyside Police, it's unlikely that this would have been highlighted as an issue.

Equally, this can not be viewed as an isolated incident involving only one employee. We know that police forces across the UK have a serious problem with no-criming rape. Police campaigns that focus on the victim rather than the perpetrator are common.

We know that "rape banter" makes it easier for rapists to plan their crimes and carry them out knowing that people are unwilling to believe rape victims. 'Banter' creates an environment wherein rape is no longer a serious crime, but rather nothing more than a joke. It is difficult enough for women to report their rapes to the police without police employees perpetuating rape culture on social media.

There are a number of questions that need to be raised in relation to this tweet. Was the employee running the social media account a civilian or a police officer? Had they received any training on rape culture? Who provided this training? Was the training internal? Is this type of 'banter' uncommon within the Merseyside Police? What are their policies on employees minimising sexual violence? Does the employee involved have a history of minimising sexual violence and other forms of violence against women and girls?

An apology on social media is a start but this is emblematic of serious failings within UK police to deal appropriately with sexual violence and to support victims. This cannot be dismissed as a one-off event. We need the Merseyside Police to recognise the links between violence against women and girls, rape culture, and police failures to make it clear that they will always take rape seriously.

One thought on “.@MerseyPolice and the small issue of a rape joke”