The Serious Case Review into the death of Hamzah Khan was published yesterday. We will not be commenting on the review itself here. We would like to examine some of the headlines that were published. We are not commenting on the articles themselves. Instead, we would like to examine examples of headlines which demonstrate both good and bad practise

The first problematic headline that was brought to our attention was an article in the BBC. Originally, it ran with this headline:

We, along with a number of other people, tweeted out our concerns about the erasure of Hamzah Khan from the reporting of his own death. We also tweeted our concerns over The BBC later changed the headline to read:

This was an improvement as the naming of Hamzah Khan should be central to any report of the Serious Case Review. We do not believe that headlines should refer to Hamzah Khan as either the “starved boy” or the “mummified boy”. His body was found mummified several years after his death from starvation but there are ways to report these facts without erasing the child himself.

The BBC were not the only media organisation whose headlines failed to name Hamzah Khan and rendered him an object as “Starved Boy” or “Mummified Boy”; The following are only a snapshop of headlines but they are representative: 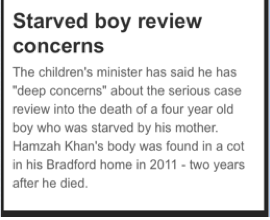 Sky News ran both of these headlines: 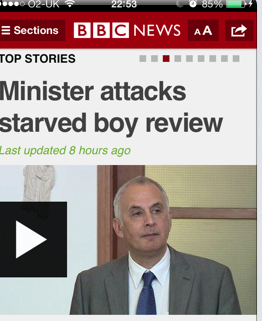 These are some examples of good practise in writing headlines that name the victim without rendering them an object.

As I was researching headlines, Sky News was on my television with the tag “Mummified Boy” in large letters appearing on the screen. Hamzah Khan was a child who starved to death. He was more than his body and reducing him to an object in death is not only disrespectful but it is the very thing which allows our culture of victim blaming to flourish.
If we cannot name Hamzah Khan, how can we expect to prevent further unnecessary deaths of children due to systemic failures? Hamzah Khan was a child; not a mummified body.

You can read our piece about the Channel 4 News coverage of the Hamzah Khan Serious Case Review here.

‹ I believed the lies about me were true Thank you ›