.@ecotricity comes out in support of rape culture

ADMIN: Following legal discussions with legal representatives of Ecotricity, we are publishing this statement:  “Ecotricity’s tweet regarding Julian Assange on 5 February 2016  mistakenly gave the impression that Ecotricity appeared to support rape culture, which it does not.  Ecotricity were unaware of the legal circumstances of Julian Assange’s various court appearances in the UK or that he had not claimed to fear extradition to the US in his appeal to the Supreme Court.”

We're not entirely sure when ecotricity - an energy company - became experts in international criminal law but they've certainly come out in support of rape culture by suggesting that men who are under investigation for sexual assault should be allowed to dictate the parameters of the investigation AND international law. 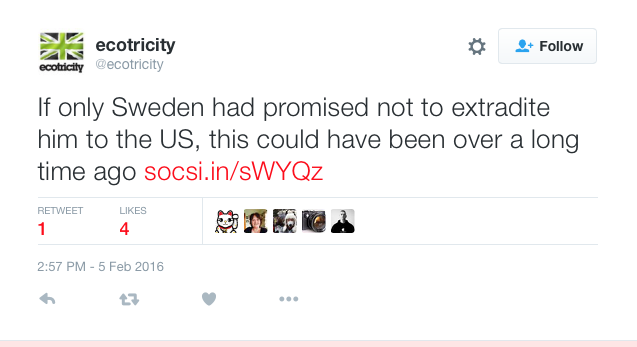 I suppose in the current economic climate all corporations need to diversify. We await with bated breath N-Power's diversification into training competitive figure skaters.

UPDATE: We have emailed ecotricity raising our concerns about this tweet. We will add their response to this post if and when we receive it.

RESPONSE TO EMAIL FROM ECOTRICITY:

The tweet very clearly relates to efforts by the USA to extradite Mr Assange from Sweden to the US, it also very clearly does not take a position on the merits of the allegations themselves.

We don't believe he is hiding from these allegations as Mr Assange has made it clear he would willingly go to Sweden to face the allegations, if Sweden guaranteed they would not extradite him to the US. Please be assured that is the point of the tweet.  We believe it is very clear.

This tweet was posted on your official twitter feed on Friday February 5. We would like assurances that this tweet does not represent company policy on allegations of rape and sexual assault. If supporting an accused rapist who is hiding in an embassy in an attempt to wait out the statute of limitations on a serious criminal investigation is company policy, then it should be the subject of an official statement so that customers can make an informed decision whether or not they will continue to support your company. If this is not official policy, then a public apology and a donation to a rape crisis service would be  an appropriate response.

7 thoughts on “.@ecotricity comes out in support of rape culture”