Last night, I submitted a piece detailing my concerns about the campaign group Child Eyes UK and their use of the tag #rapemags because I felt it was a sensationalising way of raising awareness of their campaign victory. The campaign itself is important: the removal of lads mags which objectify women and women's magazines, like Take a Break and Pick Me Up, which sensationalise male violence against women; ironically what Child Eyes UK have done themselves with the tag #rapemags. The campaign has succeeded in having women's magazines which sensationalise rape placed in the same category as lads mags by the British Retail Consortium.

This should be a victory but as I delved further into the campaign, my concerns grew. The website quotes Rape Crisis's concerns about these types of women's magazines, yet they do not seem to have contacted Rape Crisis about how to run a campaign criticising the sensationalising of rape without triggering survivors. When running campaigns to protect children from sexual violence, you need to read all the literature but you also need to access expert advice from organisations like Rape Crisis to ensure that your campaign meets current guidelines of best practise.

In this case, Child Eyes UK have failed to contextualise their campaign within feminist critiques of male violence and the patriarchy. Whilst they have convinced the British Retail Consortium to issue best practise guidelines on where to place this specific section of women's magazines, they have failed to address the actual issues involved, which includes the relationship with pornography, male violence against women and, unfortunately, there is a level of classism which permeates the entire campaign.

I have reproduced the full PDF press release below but these are a few of the issues I have with the language of the press release and its implications for understanding male violence against women and children as well as the classist discourse it reinforces.

1. Removal of the magazines from where children can see them is not about "offence" to parents. It is about preventing children from viewing material which can cause them the distress or trauma. It is traumatising to children to view material which is sexually degrading to them or which sensationalises acts of sexual violence.

2. Children, especially girls, are also victims of sexual violence. A campaign which does not acknowledge that reality whilst claiming to be "protecting" children is making a distinction between children who are important and children who are not. It is not unreasonable to suggest that the children who are deemed important belong to middle class parents because of the myth that men who sexually abuse children are "low class" because middle class men are never deemed capable of child sexual abuse.

3. The guidelines, which aren't enforceable, suggest that moving the magazines is only to decrease customer complaints. The British Retail Consortium has clearly failed to understand the concerns raised by Child Eyes UK.

4. The link between pornography is not made clear enough on the website. Do these women's magazines, which sensationalise rape, constitute pornography?

5. The perpetrators are not named in the campaign: it may be about women's magazines but the stories objected to are about male violence. We need to make it clear that that is what we are discussing.

6. We also need to be careful how we write about these magazines. I do not like them, however, for many women Take a Break and others can represent the first time they've had the space to discuss their own experiences of sexual violence. We need to create more spaces where women can write their experiences without being subjected to victim-blaming and claims of lying. For some women, these magazines may be part of their healing process. Suggesting that they are only for "low class" women, a theme which runs through the website, is intensely unkind. 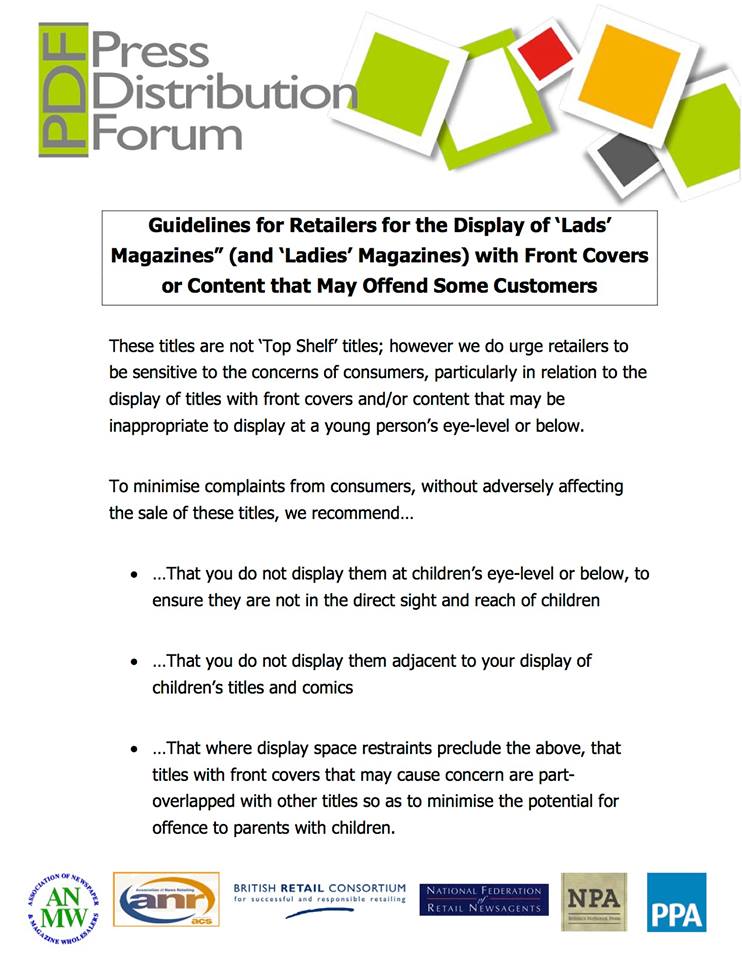 ‹ #endtabloidmags : How to Use Twitter to Campaign without Triggering Survivors An Open Letter to @ChrisDaviesMEP ›