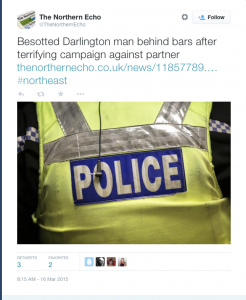 The article was promptly challenged by Professor Nicole Westmarland who asked them to change the word 'besotted' to 'controlling'. The online edition was updated very quickly. They also added a link to Women's Aid after Prof. Westmarland requested it - something that should be automatic if a journalist is following the guidelines on reporting violence against women and girls as set out by the National Union of Journalists. The problem of media minimising male violence remains though.

The first conviction Michael Coates received was for assault. He was given a suspended sentence and a restraining order. 3 months later, Coates kicked in the door of the victim and pulled her mailbox off the wall. He received another suspended sentence and restraining order, which he violated 5 days later. He then continued to harass the victim. We were clearly shocked to discover that a man convicted of assaulting a partner with two restraining orders has previous convictions for harassment against a partner and a two-year sentence for grievous bodily harm with intent in 2007.

Thankfully the judge of this third trial, Recorder James Adkin, recognised that previous two suspended sentences were too lenient and Michael Coates, was sentenced to 12 months for harassment and two charges of breaching a suspended sentence and restraining order.

As ever, defence attorney Zoe Passfield, suggested that Coates wasn't violent (minus the first conviction for assault and the whole kicking in of the front door obviously) and had "rarely been threatening" during the harassment. It could just be us, but we see harassment as threatening behaviour. Coates may not have made threats of physical or sexual violence but the act of harassment IS threatening behaviour. Passfield also suggested that Coates missing "important family occasions" whilst in prison was not a good thing - there was extreme eye rolling at EVBHQ at that line.

We expect defence attorneys to use mitigating language for male violence. The media is not required to support defence attorneys. There are legal limits to what the media can publish during trails, but nowhere do the guidelines suggest that the media must refer to violent men as 'besotted' rather than controlling or violent. Media guidelines don't require them to collude in the minimisation, obfuscation and erasure of personal responsibility.

The National Union of Journalists guidelines on how to report on violence against women and girls are easily googleable and quite simple to read. It would be nice if more journalist, sub-editors and editors took ten minutes to read them.

‹ In the Know Campaign: why clarity is essential in rape campaigns Suspects being investigated for rape and other forms of sexual violence do not require anonymity ›