This is how @BBCSport chose to advertise their article on Adam Johnson's conviction for child sexual offences. 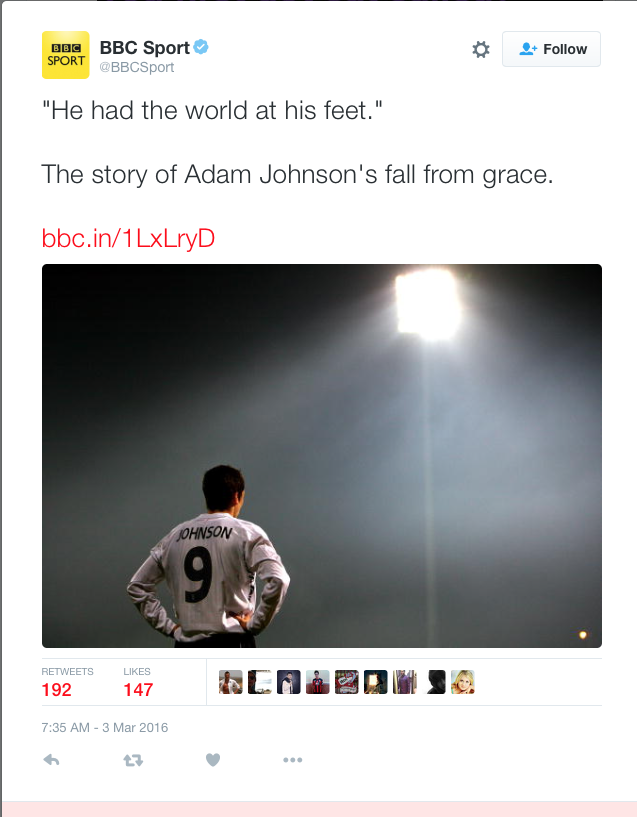 Things which constitute a fail from grace in sports: taking illegal substances or throwing a game.

Things which constitute criminal acts: the sexual abuse of a child.

Things which are not the same: the sexual abuse of a child and taking steroids.

Realistically, you can't expect much from a media outlet more concerned with the career of a man convicted of child sexual abuse than the victim as seen by this sub-heading:

A car accident that damaged Johnson's leg so much that he couldn't play football again would be an example of your world "crashing  down". Making the deliberate choice to target a teenage girl for sexual abuse (grooming) and then sexually abusing her do not count as accidents that are not your fault.

Thankfully, this article did manage to mention the debate over whether or not Johnson should have been suspended with full pay as soon as he was charged. We'd say yes since football clearly has a problem with its players perpetrating violence against women and girls and then erasing it from public knowledge. However, suspending Johnson to "protect him" from abusive chants from fans is asinine. Johnson should have been suspended because he was charged with a serious crime of violence. Being a footballer is not a right, nor is it a 'normal' job. Part of being a footballer is being a role model for children. We do not need any more footballers who commit rape. Our children do not need to grow up in a culture that considers the ability to kick a ball the mark of a hero who is allowed to do whatever they want.

Contrary to this section in the BBC article, being a footballer adored by millions does not negate one's personal responsibility for criminal activities: 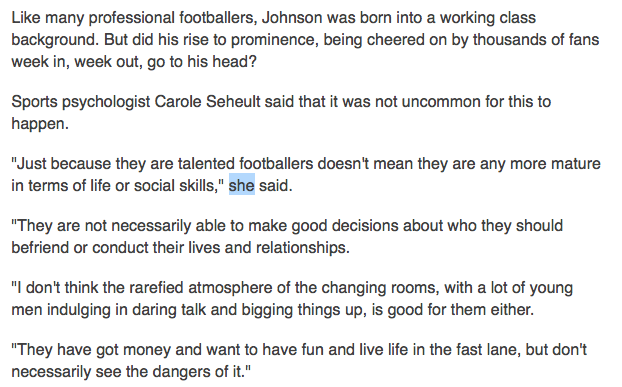 It is true that the vast majority of professional footballers are working class, however hyper-masculinity, male entitlement and rape culture are not the sole purview of working class men and this theory is incredibly damaging as it erases the way they function within other social classes.

Sexual violence is not a matter of "good decision making abilities": it is men, of all social classes, who believe they have the right to sexual access to the bodies of women and children. Footballers may be young men who are thrust into the limelight that they aren't prepared for but choosing to sexually assault a child isn't the same as blowing your first paycheque on a Ferrari you can't afford. It is utterly disingenuous to conflate criminal behaviour with an inability to budget - something which is also not just limited to working class footballers. This type of psycho-babble infantilises working class men and insinuates that middle class men are far more capable of making "good decisions" i.e. not sexual predators, which is patently false since rape is a crime perpetrated by men of all social classes.

This article is simply further evidence of the fact that journalists who write about sports (or entertainment) should not be allowed to write about sexual violence. It's evidence that ALL journalism students should be required to take a mandatory course on male violence against women and girls as part of their degree without exception.

Men who commit child sexual offences do not "fall from grace", nor is their career of any importance outwith their use of it to access vulnerable victims as Jimmy Savile did.

We do NOT give permission for posts to be reproduced, translated or otherwise published elsewhere. We will not contact people who submit their personal experiences on behalf of journalists, bloggers or other third sector organisations. These testimonies remain the intellectual copyright of their authors and must be treated with the ethical guidelines used by academics for research involving human subjects. Our full guidelines can be read here.

One thought on “.@BBCSport confuses child sexual abuse with throwing a football game.”