UN: “Sex with children is prohibited”

We'd like to say we're shocked by this poster at a UN compound in South Sudan, but we're not. 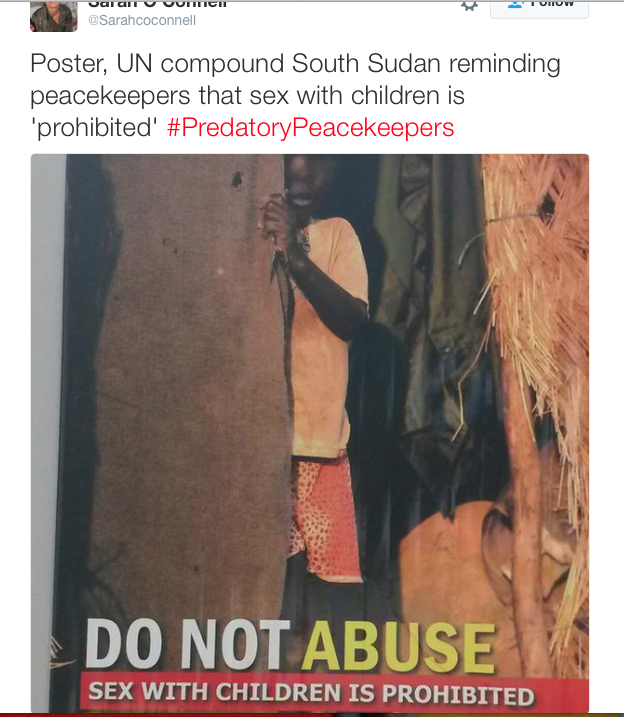 It is no different to many other poster campaigns created by police forces across the globe: minimisation of language and failure to name the problem.

Perpetrators of sexual abuse, rape and murder in war zones are predominantly committed by men. Just as they are in non-combat zones.

Equally, there is no such thing as "sex with children". It is rape.

As we've written on so many occasions, language matters. Using the term 'sex' to refer to rape is rape culture. It normalises the sexual abuse of children.

Granted, 'peacekeeping forces', whether UN or NATO or others, do not have the best track order in preventing the sexual abuse and rape of civilians. Or, preventing their own troops from raping children as witnessed recently in the Central African Republic (CAN). Even here, the headline is "French Commander Forced CAR Girls to Have Sex with Dog" rather than "French Commander had girls in CAR raped by dog". Clearly, we need a campaign to ensure that the rape of children (and women and men) is taken seriously by the UN, but this needs to start by using the right language.

The simple fact is that we are still in a position where UN compounds are required to tell their staff that raping children is wrong. This is no different than the mass rapes perpetrated during World War II by Allied Forces - that includes Soviet, Nazi, British, American, Canadian, and Australian troops. 70 years on, Never Forget has become a meme rather than a commitment to ending violence and genocide.

If we cannot trust 'peacekeeping forces' to behave in an ethical manner, then we need to be able to hold them accountable. The fact that UN soldiers have immunity from prosecution within the countries they are working in is not good enough. Depending on national governments to prosecute their own troops doesn't work either. This is why we support the petition created by Samantha Asumadu and Guilaine Kinouani demanding  that the UN take responsibility for the sexual violence perpetrated by it's own peacekeeping forces and all other staff.

A 'peacekeeping force' that needs to be told not to rape children is a force not fit for purpose.

One thought on “UN: “Sex with children is prohibited””