We can not attend the Million Women Rise march today but we stand in solidarity with the women marching in Central London. We can end male violence against women and girls within in the UK and globally. This includes state sanctioned violence, such as the so-called 'austerity' cuts, discriminatory government policies, poorly trained police, social workers, and the entire judiciary system as well as staff who work in front line services such as housing, immigration, Revenue and Benefits, and the NHS, and that perpetrated by individual men. All women and children deserve the right to live without male violence.

More than 10,000 women will march through London to call for an end to violence against women

More than 10,000 women and children will take to the streets on Saturday, 5 March 2016 on the weekend before International Women’s Day

The march, organised by Million Women Rise (MWR). Is holding up a mirror to the reality of male violence against women in the UK, bringing women together to say enough is enough.

Million Women Rise organises coaches to make the march accessible to women from all over the UK, thousands of whom will meet at 12 noon on Duke Street next to Selfridges.

“Million Women Rise provides a unique opportunity for women and girls to come together to raise our voices in a clear demand for equality, justice and the realisation of our rights. For many of us who too often feel silenced, or who feel that our activism has been reduced to strategic advocacy and the odd tweet or Facebook post, Million Women Rise provides a space where we are able to shout, sing and speak openly about interconnected issues such as patriarchy, racism, homophobia, detention and austerity. Crucially, Million Women Rise supports and encourages the leadership of Black and ‘minority ethnic’ women and girls in away that we do not often experience.

This year at our march and rally, we will honour the women and girls that continue to rise, despite the oppression we face. This year we will also honour and mourn those that we have lost. We will bring our bodies, our instruments, our banners and placards, and our voices and we will say, Together we can end all forms of violence against women and girls.”

“We demand that the government signs the Istanbul Convention and that they fulfil their obligation to CEDAW. We women will not go away and we will not be ignored.

There are women here today from all over the world and the UK. We want the UK to open its borders, for women and children fleeing their homes and in desperate need help. It is disgusting and inhumane what is going on at our borders and in Europe regards the refugees.

It is also disgusting and uncivilised the way our government is ignoring women and girls here in the UK fleeing their homes because of domestic and sexual violence, and the refusal to rehouse women and children securely with affordable rents and specialist innovative women’s services that can fully support their recovery.

This government is decimating the women’s sector and groups and perpetrating their own financial and mental violence on us. Women and girls have human rights as well.

This is just the beginning of International Women’s Year 2016 and there is lots more to come!”

It is always powerful and inspiring, restoring our strength and our pledge to ourselves and each other to never give up until the violence stops.

Professor Liz Kelly from the Violence against Women’s Coalition (EVAW) and head of Women and Child Abuse Studies and Research Unit at London Metropolitan University.

This march is supported by women’s organisations up and down the country including Women and Girls Network, Imkaan, Southall Black Sisters, the Women’s Resource Centre and Rape Crisis England and Wales.

While the march is for women and children only, men are invited to cheer from the sidelines.

At the rally in Trafalgar Square following the march, there will be inspirational speakers to listen to, including survivors of the kind of violence and abuse we are marching to prevent.

The march and rally demand more than words, enquiries, policies and strategies from government. Women are marching to demand the money and resources to match the levels of violence we live with and to enable women to live free from the threat of male violence.

Million Women Rise also calls for International Women’s Day (8 March) to be declared a national holiday in celebration and recognition of women’s contribution to all areas of UK society.

Million Women Rise is a coalition of ordinary women who want to see an end to all forms of violence against women in their lifetime. Everybody who works with MWR does so free of charge and our activities are funded entirely by donations. You can find more information at millionwomenrise.com. 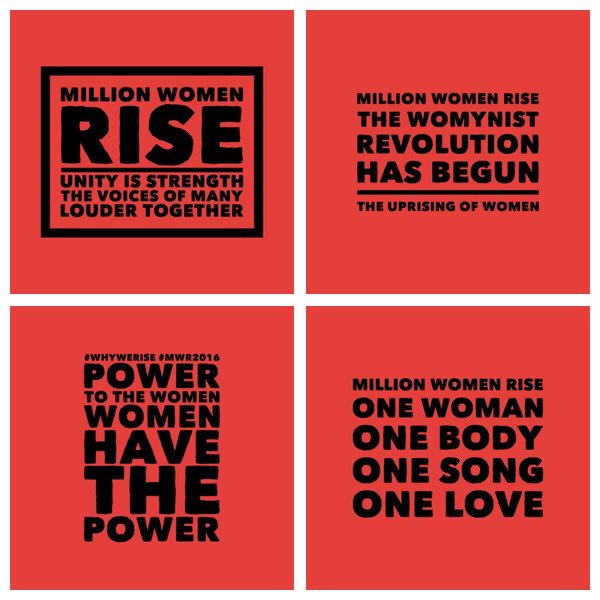